It’s hard to separate the Zero Year installment of Batwoman from recent controversy surrounding the book’s creative team. DC Comics did not allow J.H. Williams and Haden Blackman to finish the story they built up over the past two years. Batwoman #24 left readers with a huge cliffhanger that won’t be resolved anytime soon. Marc Andreyko has all of the cards stacked against him, given the task of writing a tie-in issue on his first outing with a fan-favorite character. Does he succeed in overcoming the odds? 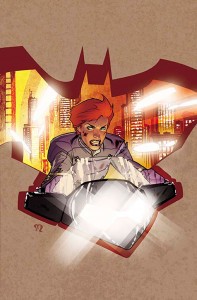 Compared with other Zero Year tie-ins, this issue feels more connected to Bruce Wayne’s origin story. Remember Phillip Kane’s role in Batman #24? Did anyone else notice the framed photos of the Kane family on Phillip’s mantle? Kate returns to Gotham City from West Point to attend her uncle’s funeral. Turns out, Kate Kane and Bruce Wayne are now cousins and Alfred calls her “Kathy Kane” (a reference to her Silver Age incarnation). Oh the joys of retconning in comics. They exchange a few words at the funeral reception, but it’s clear the cousins are not particularly close. Then Bruce politely kicks out his family so he can put on the cape and cowl. In turn, Kate puts on some jeans and a hoodie and goes out into the night.

There are some strong points to this issue. I love Andreyko’s inclusion of Maggie Sawyer–I’m hopeful that she will maintain a strong presence in upcoming story arcs. Kate Kane is still “in the closet” at West Point, which adds weight to a particular scene at the end of the book. The relationship between Kate and her father is endearing and highlights their sense of duty and military background. Andreyko also does a great job capturing Bette Kane’s voice in a short but enjoyable appearance.

The weakest point of the issue is the artwork. Just glancing at the credits might raise some eyebrows. There’s literally four artists and two different inkers on this book and it’s not even an annual. This can probably be attributed to the creative team change as well, but it feels so distracting as you read through. In one scene Bruce Wayne looks about 50-years-old. Details like Kate’s eyes and facial structure look almost bizarre from page to page. The most consistent panels are drawn by ongoing artist, Trevor McCarthy.

The Verdict: Pass. The artwork drags down the overall quality of the issue and makes it feel rushed. I couldn’t get past it as a reader, but others might not find it as distracting. Andreyko has a lot of potential as the new scribe on Batwoman and I would like to see how he does on future issues with Jeremy Haun.