This volume of X-Men: Legacy began as part of the first wave of Marvel Now, and with issue #24, it ends. The story of Legion, pariah and prodigal son of the X-Men, finding not only love but finding himself, ends quietly–with no waves rippling out from it into the rest of the Marvel or even the X universes. But, what it says about what it means to grow up, what it means to fall in love, and what it means to be okay with yourself is a message that should be shouted from the rooftops. 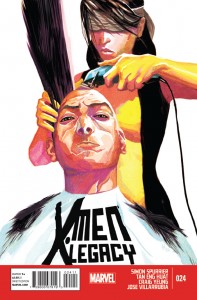 In the last two issues of Legacy David has become what he feared he would and what Blindfold foresaw: The World Worm. Think Tetsuo at the end of Akira, but the psychic version. Because of this, the last two issues have been largely internal monologue–David talking about what is happening to him, what is happening to mutantkind, and how he feels about it. I can tell you that this kind of monologue is no walk in the park for even the best of writers. Spurrier handles it like a champ, however, and even when issue #24’s story wanders into the territory of meta-narrative, David’s words never tip over and fall into the well of cheesy or preachy. And, above all, David remains himself while still undergoing a profound transformation. I personally will keep this series nearby and refer back to it often as not only a great read, not only a lesson in great writing, but as a reminder of how important stories and fiction can be to us a people living in the world.

The last two issues have seen the return of series regular artist Tan Eng Huat. Tan’s style is not as precise as some other artists, but I believe that’s best for this series–this arc specifically–than an artist more steeped in realism. Everything in David’s world–including his inner world–is very fluid under Tan pencil, bending and swaying almost constantly. The look of this final issue reminds me of sitting up late at night watching Liquid Television on MTV with the volume turned so low as to be almost imperceptible so that no one else in the house would wake up. Legion feels like he would fit right in there, on the latest of late night shows, twisting the conventions of art and bashing down the fourth wall with prejudice.

As you can see, I’ve decided to extend the credits above to include a lot more people. I’ve done this because I believe that they all had an important hand in what became X-Men: Legacy, not just in this issue but in the whole series. The colors in issue #24 are simply amazing, and also not unlike a box of crayons being slowly melted down. The lettering here is also top notch and has been throughout Legacy as David often not only speaks to himself, but speaks as different personalities. Oh, yeah, and his girl friend has a bit of a vocal tick that is so perfectly expressed by the lettering of her dialog that I can sometimes hear her voice in my head. Editor Daniel Ketchum is mentioned in Spurrier’s final letter in the back of the issue as the driving force behind the series, and so I’ve included him here as thanks for his, the most invisible art. And last, but certainly not least, I want to talk about Mike Del Mundo, whose covers were the reason that so many people even took a chance on this book in the first place. For the final cover of the run, we see Blindfold shaving off the improbable and yet iconic high-top of Legion, and I found myself sitting and staring at the image for a long time–looking from one side of David’s face to the other. On the one hand, he looks like himself, but without the hair the likeness to his father, Professor Xavier, really shines through. It’s almost creepy. I know for myself that I may have never taken a chance one X-Men: Legacy if not for the bold and brilliant covers provided by Del Mundo, and whenever I talk to people about it I end up referring to the book as, “The one with the awesome covers of the guy with the crazy hair.” It’s hard at this point to imagine the series without Del Mundo’s covers. Fortunately, he was able to complete the entire run and create a gallery of covers that are so much more than just jokes about Legion’s hair, but are also really great jokes about Legion’s hair.

Buy it. One last thing I want to mention about this story: I believe that there is a strong message about conquering mental illness in these pages as well. David is not only suffering from the influence of many, many personalities, but he’s depressed and dealing with a lot of grief. And yet, the story is about him not only reclaiming the pieces of his shattered mind, but about him going beyond coping and actually fixing himself. I found his final conclusions inspiring and worthy of writing on the cover of my notebook. As you might have deduced from the subtle way I talk about it in this review, X-Men: Legacy is over for Legion and for Simon Spurrier and company. That means that this is the perfect time to go back and get caught up. I would love nothing more than to see this book do well in trade and for it to get a nice, hardcover, all-in-one edition. Check it out if you’re getting tired of the superheroes, if you love the superheroes, or if you’re just looking for a good story to kill over a weekend. Share it with a friend! Buy two! And remember, “Lives still matter whether they happened or not.”