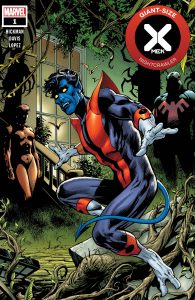 Jonathan Hickman’s revival of the Giant Size concept continues this week with Giant Size X-Men: Nightcrawler. While the first Giant Size X-Men (Jean Grey + Emma Frost) was an artistic tour de’ force in a nearly silent issue this Giant Size X-Men issue feels like a nostalgic trip to the mid’ 80s and also an excellent X-Men story. The early to mid ‘80s was the original dawn of X as writer Chris Claremont’s run on the Uncanny X-Men became must read month after month. I was happy to be part of that original run as I was a relatively new comic collector and I was blown away month after month by how incredible the adventures of the X-Men were. I was saddened when John Byrne left the book but I quickly came to enjoy Dave Cockrum’s artwork and the book took on a more sci-fi vibe as adventure after adventure took place in deep space. It was during this era of the Uncanny X-Men that we come to know the Sidri, or the Sidri collectives. The Sidri were an alien race who had a hive aspect as they were able to join their bodies together to form large spaceships as they travel through space. These beetle like creatures with their single eye were never as popular as the Brood but fans of this era were always happy when they returned and now they have reason to be happy again as the Sidri are once again posing a threat to the X-Men.

Since the island nation of Krakoa was formed the X-Men have had little use for their former mansion and the grounds of the Xavier School for Gifted Youngsters. Yet when an active mutant signature is detected on the former grounds it falls to Nightcrawler and a select group of X-Men (Magik, Cyper, & Eye-Boy) to investigate. Its apparent from the outset that things are night right at the former X-Mansion. The grounds and building are in disarray as not only Krakoan gate bio-tech taken over some of the mansion there is also obvious signs of neglect and abandonment. Nightcrawler quickly begins seeing ghosts, first in the form of his short time comrade John Proudstar, who perished early on in the Claremont run (and for some reason has yet to be brought back by the five and the Krakoian resurrection technology) and then in the form of his former teammate in Excalibur Rachel Summers in her Hound persona. What quickly began as a simple investigation quickly spirals into an unexpected conflict with a hive of Sidri who have their sights set on the Xavier School grounds. With a mystery mutant at the center of the escalation and surprise cameo by a classic New Mutant Hickman really provides a story that is dipped in classic X-Men lore but told in a way that even new fans will love this tale.

Jonathan Hickman’s resurrection of the X-Men group of titles has been a tremendous return to form of the X-Universe and these Giant Size issues are simply topping on the cake. Hickman’s sense of X-History is incredible and how he has weaved the past into the present has been a joy to experience. Bringing in the legendary artist Alan Davis was a stroke of genius as Davis has a couple of historic runs on the adventures of the X-Men but he is probably best known in X-Lore as the original artist on the Nightcrawler led X-Book Excalibur. To me it made perfect sense to have Davis artwork on this issue as it instantly brought back happy memories of those glorious campy UK based adventures of Excalibur and Nightcrawler truly came into his own during that books early days. Yet unlike the first Giant Size special that truly did focus on Jean Grey and Emma Frost this one may be called Giant Size X-Men: Nightcrawler this is actually an ensemble book as every member of the ad hoc team gets their time to shine. Hickman obviously has a fondness for the ‘80s era of the X-Men as many of his stories have distinct call backs to those iconic days and every longtime fan is appreciative of this fact.