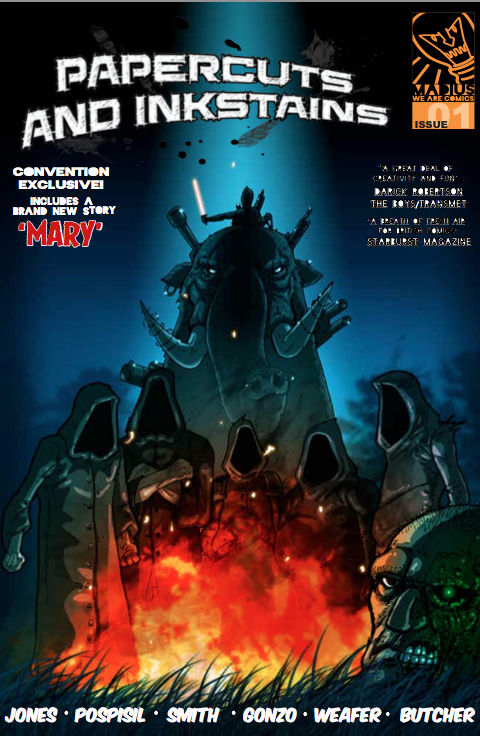 Papercuts and Inkstains #1 is produced and self-published by the creative team at Madius Comics. The first of three thus far, with another in the works, issue #1 includes four shorts written by Rob Jones and with art from various creators. Printed uniformly in grayscale, the stories differ significantly in tone and art style. Despite the lack of an overarching theme, however, the variety in genres serves to hold the reader’s interest and doesn’t detract from the issue as a whole. It offers something for everyone, from comical to horrific to heart-breaking, and displays a promising array of work.

“Profits of Doom,” is the last of the shorts, with art by Mike Smith, and was a happy surprise. I tend to prefer horror and suspense, but “Profits of Doom” shines a spotlight on the comedic writing abilities of Rob Jones. It introduces the reader to a group of wanna-be druids trying to conjure a demon lord and take over the world. They’re a few points shy of intelligent, and the story is witty but silly fun, as the robed men bicker and fumble their way through the ceremony. This is a story that definitely could have more to tell, so perhaps another installment of “Profits of Doom” awaits us? I’d be up for it.

In contrast to the goofy humor of “Profits of Doom,” “By ‘Eck on Earth,” is horror at its best. A zombie tale and the second piece in the issue, the art of Kevin Pospisil jumps off the page in eerie realism. The panels read in a manner that speaks to the professionalism of the artist and writer. The angles are interesting but not confusing, and Pospisil doesn’t shrink from blood and gore. Though it’s predominately intense, there is humorous narrative as well, and the ending left me a bit weepy. To combine zombies with pathos is no small task, and it’s executed with seamless finesse in “By “Eck on Earth’.

“NO,” the first short, with art by Nick Gonzo, and “Mary,” with art by Stephen Weafer, round out the collection. “NO” is a futuristic tale that chronicles the workday of a weary Time Adjudicator as she presides over various inter-space/time battles for her insidious employer. There’s very little dialogue and the art is playful and energetic, with intricate scenes of battle-ridden dinosaurs and tripped-out weaponry. However, the components of the more elaborate drawings are slightly murky without color, and the details are somewhat lost unless the reader takes the time to examine them.  I did feel that I needed some further exposition to provide a more solid context, either through the art or writing. On the other hand, it’s got dinosaurs, time wars and exploding things, so enough said.

“Mary” is  a dramatic glimpse into madness and melancholy, with a Victorian Gothic feel that speaks to my artistic sensibilites. In this short, the tormented inner dialogue of a distinguished gentleman is progressively revealed as he ruminates about the mysterious “Mary”. Weafer’s art is a perfect fit and his shadowy scenery and close up facial expressions convey the sense of loneliness and isolation that the story requires. Jones takes the tale down a slightly different path than expected, with a twist that again adds some heart to an otherwise dark theme. I had hoped for a more horrific ending, as I felt the story was leading up to it, but was not disappointed with Jones tragic plot  twist.

Aside from a slightly confusing beginning and a few possible tweaks,  Papercuts and Inkstains #1 is overall an entertaining read with quality, unique art. I’m interested to see what Madius Comics will be turning out in the future, especially as the team becomes more and more established as a noteworthy presence on the indie scene. I’m also curious to see what the team of creatives could do with a themed anthology, though I appreciated the variety in Issue #1. Please stay tuned for reviews of Papercuts and Inkstains #2 and #3.