FacebookTwitterPinterest
Robert Kirkman and Ryan Ottley have been showing off this arc for a long time, and now we're at a huge milestone issue for the series. After seeing The Walking Dead's hundreth issue, we're left wondering what sort of story we'll see in Invincible's. 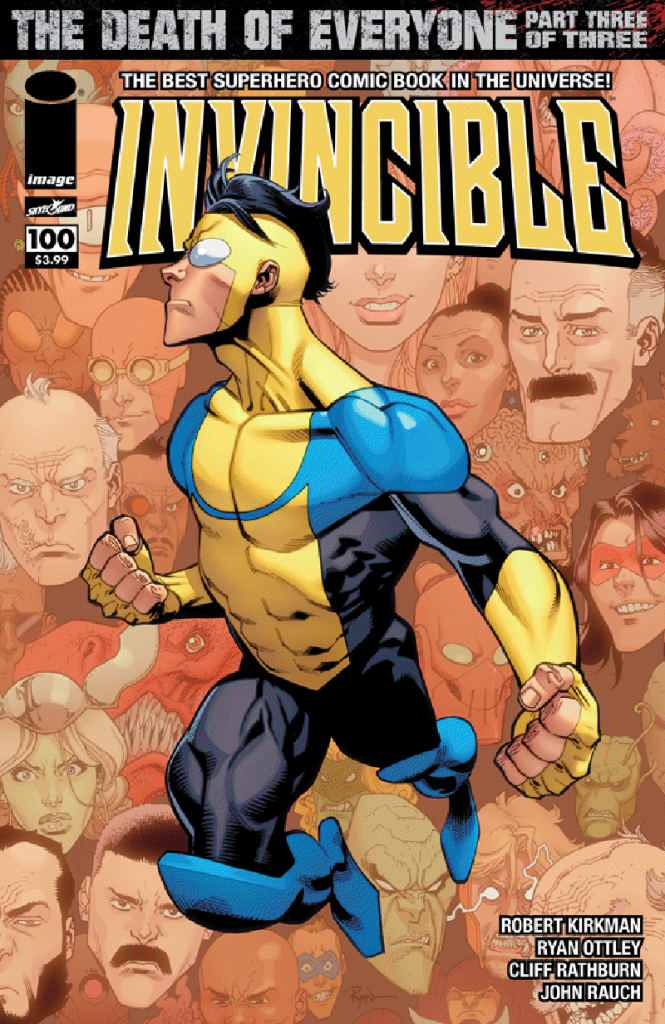 Robert Kirkman and Ryan Ottley have been showing off this arc for a long time, and now we’re at a huge milestone issue for the series. After seeing The Walking Dead’s 100th issue, we’re left wondering what sort of story we’ll see in Invincible’s.

This issue has been a long time coming. Hints and signs were dropped through character motivations that informed readers that these people do the things they do because it’s simply their nature to do so. Precisely how all that goes down, however, is completely up to Kirkman and Ottley’s storytelling and their willingness to provide the wildest plot twists and turns.

Without going into spoilers, the end of this issue left me feeling like everything old is new again and that things in the Invincible universe are going to roll back to a point before the big Viltrumite War arc. In a way I feel this is a good move because it allows Kirkman room to keep the good character changes after the war but allow breathing room from the hard choices and distorted points of view some of the characters have made since then; principally Mark’s actions.

This isn’t to say they’ve run out of story and are fishing for some way to recycle old stuff. I do firmly believe there’s a great story to come up from the aftermath of the arc and it’ll be something in the order of Dan Slott’s revision of Spider-Man. The question now is where will it come from, and who or what will flush it out?

On the technical side, we’re seeing a lot of the same we saw during The Walking Dead’s #100, including a trillion amazing covers including a chrome cover. They probably won’t go for the crazy, nearly firesale-like, selling attitudes as the Walking Dead’s but they’ll be amazing collector pieces, as the art is something to behold. You can bet that awesome stretch cover will be a poster sometime in the near future.

As always, Ryan Ottley, Cliff Rathburn and John Rauch deliver a masterful issue on this centennial celebration, and though they haven’t done the entire series together, they have defined the title since they were brought onto it. The fact that Robert Kirkman has produced two top-tier independent titles that have both reached 100 issues is a testament in and of itself. Not a lot of creators can say the same, and it definitely inspires the creative environment to attain similar success.

Buy… and then go read issues 1 to 100 over the weekend to see how this amazing book got there. It’s a fun ride.