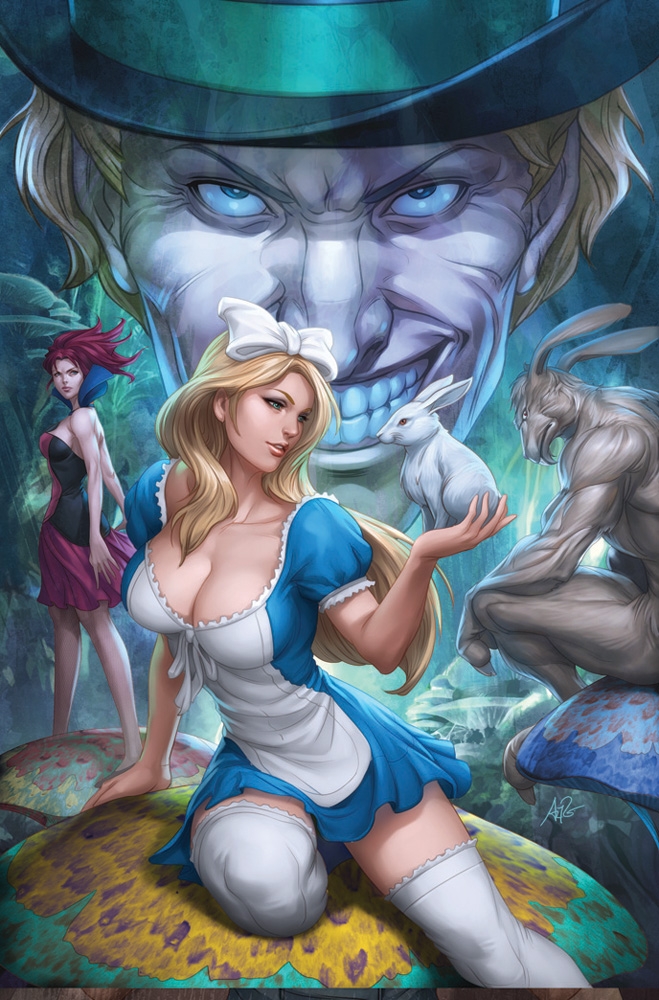 With the ringing in of a new year brings all manner of new comic book properties ready to dazzle your imagination and satisfy your cravings for the fantastic. Zenescope is coming into 2012 with some pretty big guns at the start of this year with their presentation of Alice in Wondeland and The Jungle Book following close behind. The team at Zenescope are no strangers to the wildly wicked world of Alice and are ready to take you once more down a dark and twisted rabbit hole.

The comic begins with an eerie scene in which Alice’s parents are standing, locked arm in arm, coaxing their daughter to explore a rabbit hole, found inside a tree located on their land. What strikes me about these very first pages is that I get the impression that both parents know full well the dangers that await their daughter should she chose to venture to the other side. It’s this kind of cold and distant malevolence that carries throughout the pages of this first issue, leaving the reader feeling vulnerable and overly cautious. What happens to Alice next is a version for that tale that you’ve never heard before. Disorienting and foreboding, Alice in Wonderland relies on the fantastic charm and characters that made the stories set within the first few Wonderland collections published by Zenescope so appealing. It’s relieving to know that Gregory and so many others can revisit a property and still manage to make it fresh. Alice and Wonderland has always been the kind of source material that lends itself to all manner of bizarre storytelling and this first issue is proof of that.

Not only am I digging the necessary disorientation of this book, this is Wonderland after all,  but Robert Gill and Jason Embury have put together some truly horrific and striking panels upon which to feast your eyes. All of the familiar characters of Alice in Wonderland  are there, but have, of course, been transmuted by that signature Zenescope style leaving each character marred with evil. It’s comics like these that when a reader says to themselves one day, “Man, I’d really like a dark ass Alice in Wonderland book.” you’d be hard pressed to find anything more sinister that this.

Buy it – Stories from the Alice in Wonderland universe when presented by Zenescope have always been worth collecting, and I have a strong feeling that this series will be no different.