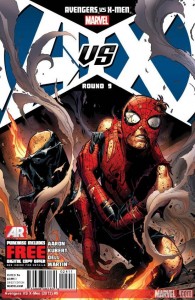 This is one of those covers that actually show what happens inside the book! Apropos!

With issue #9, Jason Aaron and Adam Kubert produce one of the best chapters of the Avengers Vs. X-Men crossover so far. This is the first chapter in this entire mini-series (and most of the tie-ins) to really portray the Phoenix Five’s internal struggle with their omnipotence. My biggest gripe with the series so far has been the obvious favoring of the Avengers as the good guys since the X-Men became Phoenix-endowed. The last 5 to 6 years worth of storylines in the X-universe have been about the X-Men trying to reassert themselves as superheroes in the greater Marvel U (anybody remember, “We have to astonish them?”). Imbuing the X-Men with the Phoenix force at the end of Act I allowed the writers to turn our merry mutants into global revolutionaries—superheroes who could finally bring peace to a world that hates and fears too much. The fact that the Avengers fought back against this new (better) world so readily and haphazardly raised questions about their brand of unilateral heroism—appropriate to the storylines that have been going through the Avengers titles for the last 5 or 6 years as well. A lot of these thematic beats were hit in issue #6 (by Jonathan Hickman), but they’ve been ignored in issues since in favor of painting the Phoenix Five as overpowered tyrants and the Avengers as the world’s fledgling saviors.

Yes, we needed to get to that point in the story, but it happened too rapidly and with too little thematic escalation or character exploration. For a 12 issue series, I’m pretty sure we have the space…

With this chapter, Jason Aaron succeeds in bringing an intimacy to the crossover that has been sorely lacking. He chooses to frame the entire issue around Spider-Man and the idea of heroism and moral responsibility (“Great power comes great responsibility” etc. etc. etc.). While the reasons for having Spidey train Hope are still a little vague—is she going to be the next Iron Fist?—they do have some nice scenes together early on that make the final moments of the issue carry significant emotional resonance. Colossus and Magik get some great character beats toward the end of the issue that speak to their individual personalities as they have developed over the last few years. Colossus desperately wants to protect his sister; Magik isn’t really that sweet little blonde girl with the straight bangs from the Claremont days. The escalation of their scene together in Magik’s limbo-prison is pitch-perfect and builds to a believable climax with appropriate storyline consequences.

Emma Frost and Cyclops also get a phenomenal scene together that, for the first time in this crossover, does not ignore their relationship or their character development from the last few years’ worth of stories. Emma in particular takes part in a frightening one-page scene that portrays all of the ambiguities of the Phoenix Five’s power.

Also, Black Panther and Storm talk about their marriage in detail for the first time since, like, 2009. Unfortunately (?), they’re conversation is about annulment. Bummer. Related: What is with Marvel right now!? It’s been a rough couple of weeks for relationships: Bucky/Black Widow, Steve Rogers/Sharon Carter, Black Panther/Storm, Cyclops/Emma Frost, Peter Parker/MJ (wait…). The only couple that seems to be doing well is Northstar and his husband.

Adam Kubert’s artwork is well-suited to this chapter. From the more traditional superheroic-smackdowns to Magik’s Hellish Limbo-prison (Prismbo?), Kubert’s scratchy pencils capture every moment in fantastic detail. In many ways, he succeeds in blending JRJR’s old-school style with Oliver Coipel’s scope, detail, and drama. This makes him the perfect artist to close out the remaining Act of the crossover.

Read it! If you’ve been reading along, this is the first issue that really grasps the X-side of the conflict. It’s not all there, but the way in which Aaron frames the story and escalates the conflict through character rather than mere punches is a welcome change from earlier chapters. Fans of Spider-Man especially should check this issue out; this could be the issue that cements him as a true Avenger.

I still hold on to my criticism that the Avengers are coming off as too “Earth’s Mightiest” while the X-Men are getting what is the equivalent of character assassination. Sure, some X-Men may jump ship because the Phoenix Five are being corrupted, but why weren’t more Avengers hesitating when Steve Rogers was telling them to punch the mutants in the face for feeding starving children and negotiating renewable energy? Judging from solicits for Marvel NOW!, I’m starting to wonder if there will be a proper X-team after all this… I wouldn’t be surprised if everybody just becomes an Avenger because, you know, the Avengers are always right….