Marriage is boring in popular media. A young and single hero is more exciting and has more growth potential. Animal Man #25 makes strides against common fallacies about marriage and storytelling. Buddy and Ellen Baker’s tender reunion in last issue and their mission to save Maxine brings focus back to the book’s core–family. And Buddy Baker is infinitely more complicated and layered as a character because of it. 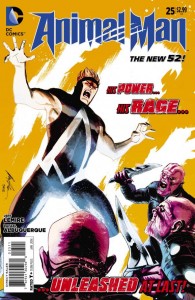 The issue opens as Brother Blood’s followers hold celebrities hostage at a Hollywood award show. Buddy and Ellen go confront the cult together cause that’s what couples do in the DC Universe, apparently. Even if one spouse doesn’t have powers. Meanwhile, Maxine travels further into the Red to hide from Brother Blood. There’s a sense of impending doom throughout the issue and Rafael Albuquerque’s artwork enhances the moodiness.

I typically don’t pay much attention to titles of particular story arcs. Yet the title “Hollywood Babylon” is perfectly fitting for this issue. There’s so many themes that Jeff Lemire weaves effortlessly into the overall storyline. The religious references can be pretty overt at points and allude to issues of belief and cult behavior. Lemire continues his critique of celebrity culture to great effect as well.

Of course, you could just read the more straightforward plot and enjoy it on its own. There’s a fair amount of punching and even Ellen gets in on the action this time. Brother Blood’s followers are a serious threat and add an interesting twist to the plot. Cliff Baker’s death in Animal Man #18 is part of the subtext of the story, as is appropriate with the death of a child.

What a difference a change in art can make to a book. Albuquerque puts his American Vampire history to good use with a Gothic-inspired tone. The fight sequences are dark and heavily shadowed but retain a clear sense of the action. I love the way Albuquerque draws Maxine’s facial expressions and her youthful innocence.

The Verdict: Definitely Buy! If you have never read this series before, then you may find the story a bit confusing with some heavy continuity. I would recommend going back to at least Animal Man #24 for better context. Lemire and Albuquerque are bringing something special to this book. It’s a little quirky and darker than many books at the Big Two and that’s a good thing.