Sometimes, a change of perspective just isn’t enough.  Deeply entrenched in its second round of event tie-ins since the title’s launch, Justice League of America #9 continues its role as a place to see the larger narrative of the DCU through the eyes of some of its ‘lesser’ residents.  While offering this unique view, and with the added bonus of fleshing out these mistreated cast members, it had found a distinctive place of importance alongside its ‘Justice League’ compatriots.  Unfortunately, this latest issue shows the limitations of that formula; as it looks at its own events from a different perspective, and as such ends up feeling like it is running in place. 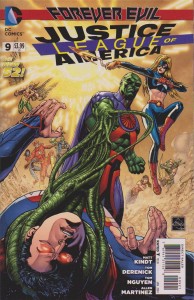 The heroes of the DCU have been ensnared in the most devious of all traps; one of their own making.  The only members able to resist the shackles that keep everyone else from escaping, Martian Manhunter and Stargirl, set forth on their mission to find answers and destroy the prison that holds them all so effectively.  But what of the others?  Can any of them be reached to assist in this endeavor?  And how long do the two unlikely teammates have before they fall prey to the prison that surrounds them?

Matt Kindt takes care of the writing half again this issue, and as far as the conversations, portrayals, and themes he is exploring; everything is well above board.  The depictions of Martian Manhunter and his world-weary dour personality, foiled against the bright-eyed optimism and exuberance of Stargirl, give the story a fun vehicle with which to explore the setting the DCU currently finds itself in.  So I have no complaints there, and frankly, am quite interested to see where the story goes from here.  Where my problem falls in this particular issue, is the retreading nature of this issue in comparison to the last from a slightly different perspective.  Where last issue went through the various prisons that the Justice League and other heroes find themselves in from the viewpoint of Martian Manhunter, this issue covered much of the same ground from the perspective of Stargirl, and really only moved the narrative forward in its final pages.  As such, it’s tough to recommend a repackaging to others who may have read the last chapter, even if the execution on that new delivery method is as solid as this chapter.  It just feels that there is so much possible ground to cover (especially with how this issue ends), that the real estate of this issue could have been better utilized to explore those different paths.

Where the storyline suffers from repetition, the artwork is being hit in the complete opposite manner; as consistency is lost when artist Tom Derenick substitutes in for Mahnke.  The two will be alternating issues moving forward, and while each have their own style that works splendidly for their issue’s specific focus (Mahnke’s rougher lines matching well with the psychological torment of Martian Manhunter while Derenick’s cleaner style meshes with the innocence of Stargirl), it is always tough on a linear narrative to have such differing storytelling methods from issue to issue.  Overall, Derenick’s artwork is more than satisfactory this chapter, and delivers more than its fair share of fun images during the journey.

Sadly a pass.  I have a tough time saying that since I am legitimately jazzed to see where the story goes from here, but this particular chapter really only took one step forward in the larger story while reiterating what the last issue had established.  The character work for both Martian Manhunter and Stargirl is well done though, so if you are curious about either character in the New 52, or have not read issue eight, this may be a good chapter for you to check out.  With the developments on the last page of this issue, I am fairly confident that this was a one-off problem and we should hopefully be seeing some intriguing tales ahead.