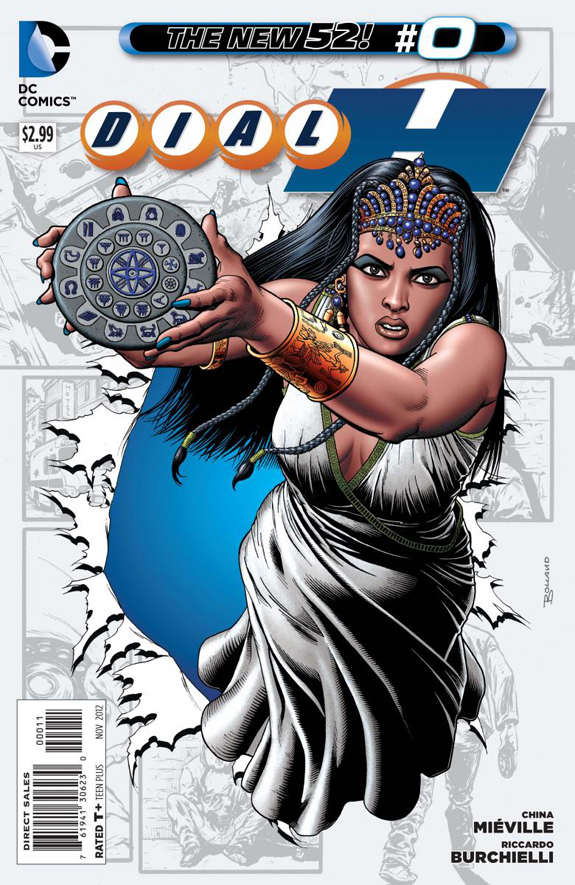 First off, I’d just like to state that up until this point I have only read the first two issues of the Dial H series included in the DC New 52. So if parts of this review appear uninformed, it’s entirely possible that I’ve missed something in the later issues that would have perhaps increased my enjoyment of this #0 issue.  However, it’s to my understanding that a zero issue serves as a type of “origin” issue, and that you should need little to no prior knowledge of the issues that follow. So with that in mind, I would think that the issues I had with Dial H #0 are entirely valid. Lets move on and see if you agree.

Laodice and her people are in trouble. An army is making its way through the sun bleached plains of her land with Mushussu, the beast of Babylon, in hot pursuit. But with the aide of a mystical sundial Laodice dials into the power of Dead Hood? No. Arrowmaid? Nuh uh. Power Squirrel? Nah. These names are ridiculous and clearly wouldn’t get the job done. Unless, of course, you call upon Bumper Carla to get the job done? Um, okay. Who would have ever thought that you could defeat a mythical beast with a mystical bumper car? Alright, I’m going to try and not focus on the absurdity of this for too long and perhaps talk about the book some more.

My problems with this issue is that, perhaps due to my not keeping up with the past few issues of the series, I had no idea who any of the characters were in this story. I’m guessing that Laodice is somehow responsible for the dialing device featured in the comic being integrated with the phone booth, but if that’s the case this issue certainly doesn’t tell us how. Now correct me if I’m wrong, but isn’t the purpose of these #0 issues to bring us up to speed on the events of the first book in the series? Because if that’s true than I feel that this book did not do a very good job of achieving that goal.

I can deal with the idea of Dial H (as a series) calling upon the powers of some truly strange heroes throughout its run but this issue just seemed to have confused me. Who was the imprisoned dude in the blue suit? How did the events of this issue effect the goings on of the ones that follow? The sundial clearly wouldn’t fit into the phone booth found in the current issues so how did that power become condensed and installed in the phone? These are all things that I would have hoped would be answered before the end of this issue, but alas, all I was left with was more questions than I had answers.

VERDICT: Don’t bother. I mean, if you’re collecting the series and really enjoying it then you’re probably going to want to pick this up. But, if you’re thinking that this could be the issue that finally pulls you into the world of Dial H then I would say that you’re mistaken. There are different strokes for different folks and all that but to me this felt like the weakest #0 released on the 5th of this month. And this is coming from someone who likes the series. And hey, if you disagree and feel that I clearly missed something, or perhaps misinterpreted this issue I welcome you to tell me why you think just that in our comment section.

* This review was written while listening to the self titled debut EP by the band  †††.