“And then there are the private roads of thought, where emotions are weather, blowing across the landscape of your imagination.”

Great horror takes its time.  It doesn’t rely solely on jump scares and disturbing images to frighten, but instead, wriggles in through your ear and into your imagination.  It permeates your dreams and invades your waking thoughts until it no longer feels like the monster is simply under your bed or in the closet: the monster was in you all along.  Such is the case with Wraith: Welcome to Christmasland #1 from Joe Hill and Charles Paul Wilson III.  This first issue of the miniseries, which acts as a prequel to Hill’s book “NOS4A2,” explores that concept of the darkside lurking in our mind’s eye and the price that is paid when one wants so desperately to make their fantasy into reality. 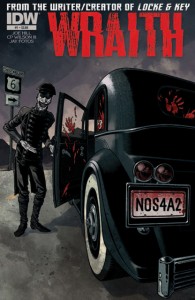 This issue serves as an origin story for the one and only Charles Talent Manx III, a man who’s life of hardships and setbacks caused him to retreat into the black corners of his mind and unlock a nightmarish world called Christmasland.  As he chauffeurs another one of his victims to this horrifying place, we get some insight into how Manx underwent his transformation and how his home came to be.

Fans of Joe Hill’s work will be familiar with his uncanny ability to nail down a character’s voice within their first few sentences, and that’s exactly what we get in Wraith #1 with Charlie Manx.  Those, like myself, who have not read the novel this miniseries is a precursor to will be meeting this character for the first time.  However, in the span of a few panels, Manx feels like an old friend.  Well, maybe “friend” isn’t the right word considering how much of a terrifying monster he is, but you get the picture.  That feeling of investment and mystery that so quickly envelops you after reading this first installment is incredible, and will make you want to explore this richly fleshed out world for hours.

Even more impressive than the way it draws you in are the ideas Wraith #1 explores.  The concept of the fruits of our imaginations gaining life by crossing over from thought to reality isn’t new.  However, the dark angle at which Hill tackles it makes it a whole new beast altogether, and one that is pretty damn scary to think about at that.  Charles Paul Wilson III’s art compliments this wonderfully.  The scene with the snowmen, for instance, is certainly a highlight, showcasing that terrible transformation our imaginations can sometimes undergo when the cruelty of the world catches up to us.

Buy It – If you like horror comics, Joe Hill, or simply want to start your holiday season off on a weird note, then this is the book for you. Wraith: Welcome to Christmasland #1 is a comic that leaves you salivating for what’s to come, while at the same time giving you plenty to chew on until its return.