Story and Art by Matsuri Hino 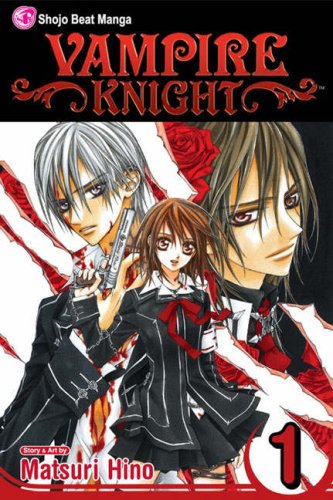 I know, I know. We talked last week about how the vampire trope is overplayed in media. But we have to talk about Vampire Knight (and Rosario + Vampire another week). One of the shojo staples is Hino’s series about humans and vampires living side by side at a boarding school, Cross Academy.

Cross Academy is distinguished by it’s competitive academics and top-notch students. And it’s secret night class full of beautiful vampires. In a world where humans are unaware of the supernatural, Cross Academy is one place where the two species are attempting to prep the rest of the world for a partnership. The headmaster Kaien envisions a world where his fellow humans live in peace with vampires. He works covertly with Kaname, a pureblood vampire who has the same dream.

Yuki Cross, Kaien’s foster daughter, attends Cross Academy and works as a guardian. Her job is to protect the night class from the prying eyes of curious human students in the day class. Who can blame their curiosity? They are explicitly told to disregard the other class of students possessing otherworldly beauty. There are inevitable conflicts, usually by a well-meaning young lady preparing to confess her love to a vampire.

Yuki works closely with Zero, another student and foster student of Kaien. Zero is aggressive, distant, and cold. He and Yuki have one common factor between the two of them: their families were decimated by vampires. While young Yuki was rescued by Kaname, Zero was left with no neutral or positive memories of vampires. Yuki grows up to see the value in living alongside vampires, and Zero only sees them as monsters just biding their time before killing someone.

Vampire Knight is a shojo manga, which means there has to be a love triangle or conflict. Since Yuki was rescued by Kaname, she grew up knowing him as a protector. It doesn’t hurt that he’s devastatingly handsome as well. Zero feels protective of Yuki as a fellow guardian of the school. The two develop deep feelings that grow more and more complicated as the series progresses. Yuki doesn’t get hung up about who she loves or wants to be around; she takes her position very seriously, and she is concerned about the relationship humans have with vampires.

If you’re looking for a good binge-read series, Vampire Knight is for you. The series is recently finished, and there are a few offshoots to check out as well. Equally addictive is the anime series. Both are fun, drama-filled, and will leave you pining for the next installment.