Story and Art by Ohmi Tomu 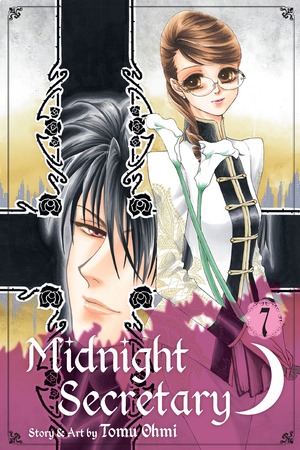 Josei manga is well known for mature stories featuring a female protagonist in a more realistic setting. Written for adult women, these manga stories have a heavy dose of drama mixed with romance. They feature housewives, office workers, and young women out in the world for the first time. We’ve talked about one great josei series, Happy Marriage?!, in this column. If you checked out that series, you need to take a look at Midnight Secretary.

Midnight Secretary differs from classic josei in that it employs a fantasy plot. Namely, vampires. If you think vampires are overplayed, you’re right. They are everywhere, and a lot of paranormal romance stories use them as the sexy bad boy the protagonist goes for. There is something inherently alluring about the medium, which explains the long shelf life some of these stories have. Midnight Secretary features a young professional woman and the slow burning love she develops for her boss – who happens to be a vampire.

Kaya Satozuka is probably the most motivation josei heroine I have ever seen (with the exception of Sumire of Tramps Like Us, a series we’ll talk about eventually ‘cause Stephanie Cooke loves it!). She devotes herself to the well being of the company she works for. Kaya is a hard worker and the pinnacle of professionalism in the workforce. She essentially makes any company run efficiently. When she is assigned as Kyouhei Touma’s personal secretary, she may have met her match.

Kyouhei is insufferable. He is known for quickly dismissing people he finds useless. Kaya is unfazed by the accusations; her mission is to do her job, and she does it according to her own high standards. When she realizes her boss is a vampire, Kaya continues to provide the best work she possibly can.

This is a josei manga and a vampire story. The next logical move in the plot is that Kyouhei inexplicitly finds Kaya’s scent – and blood – desirable. What follows is a struggle for Kaya in providing her boss with necessary sustenance for life while maintaining her professionalism. Kyouhei struggles with developing an attachment to a human, a life form he considers far beneath him. For readers, we get a steamy vampire novel with the added bonus of incredibly stylish office wear modeled by Kaya herself.

What stands out most about Midnight Secretary is Kaya’s ability to focus more on her work than on her love life. She really appears as an anomaly in the josei manga world. She isn’t obsessed with Kyouhei or romance in the same way as other female protagonists (though, she gets plenty of both!). It’s refreshing to read a manga romance without the obsessive, petty thoughts that some josei heroines have as they wonder if their love interest really likes them. As far as introductions to the genre, Midnight Secretary is a great way to get your feet wet without leaving the modern fantasy realm. Midnight Secretary is available from VIZ Media in both print and digital formats.