Created and Written by Cullen Bunn

2014 has been a great year for horror comics fans. Almost every major comics publisher has been crafting interesting, moody, dramatic horror stories to excite fear in their readers. December 10th, 2014 saw the release of The Empty Man #6, which wraps up a six issue horror/noir miniseries from Boom! Studios. Written by Cullen Bunn (The Sixth Gun, Magneto, Sinestro, Godzilla: Cataclysm, Lobo, etc.) and illustrated by Vanesa R. Del Rey (Hit), The Empty Man tells an X-Files-esque tale of two people who investigate the disappearance of two siblings and the violent, horrifying “Empty Man” disease that causes people to murder and commit suicide in horrifically extreme ways. 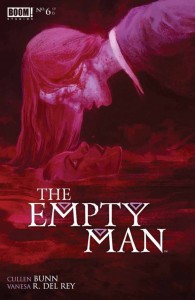 The Empty Man #6 brings to a head the threads of the previous five issues. We learn what goes on inside the mind of the Empty Man, how the Empty Man might be causing all the strange deaths and creating the bizarre creatures seeping into the world, and what happened to the two missing siblings. We also get to see glimpses of Agent Jensen and Langford both fight internal struggles, which leads to some courageous and strong actions.

Issue six of The Empty Man continued the visual style of the previous five issues. Del Rey’s unique illustration style adds to the horror feel of the book. Her scratchy, slightly off perspective style adds elements of uneasiness and dreaminess to the whole story. Although I enjoy Del Rey’s visual storytelling, her inverted triangular panels, used for some scenes, pulled me out of the story a bit. They did have an effect on me, however. Those inverted triangular panels created in me the feeling of being pushed downward, below the surface…of what, I’m not sure, maybe below the surface of the human psyche or below the surface of earth into Hell.

Bunn’s scripting was solid but felt a bit rushed. It was as though he had to spell out certain plot points quickly and plainly, to give the reader some sense of understanding and payoff after five issues of build-up and mystery. There was one scene where a character just exposited a bunch of answers all at once, from out of nowhere, really. Bunn does an excellent job of giving each character their own voice and personality, which is one reason I would love to read more stories about them.

Pick this mini-series up in trade, or track down the single issues!

The Empty Man miniseries feels like a well-executed first arch of a new TV series — creators are learning to work together, characters are learning about themselves and how they interact with others, and readers are learning the tone and themes of the whole. But that’s part of the problem as well — the book just started to feel like it was getting its footing, and now it’s finished. Unless a second The Empty Man series is produced, I feel like a lot of the groundwork laid here is wasted. Overall, the Empty Man is an enjoyably dark and creepy story!