Rai #1 is a highly appealing visual masterpiece, and it has Crayton Crain to thank for that. The art alone transports us to a Japan of the future; a utopian society ruled by the one known only as father, and where there hasn’t been a murder in over 1000 years. 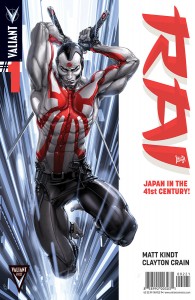 There is a lot of ambitious world building that Kindt puts into this issue, and he is able to pull it off with the help of Crain. Rai #1 takes place in world and time that have not been explored in the Valiant universe thus far. Matt Kindt has a lot of free room to move around, and he wastes no time getting into the society, technology, and ideals of future Japan. It can be a lot to process on the first read through, but the beautiful art and engaging narrative are more than enough to draw the reader back in. That’s what I really like about it. It gives us more reasons to read the issue again.

The art helps with the immersion process and surrounds us with a world of colors you can feel swirling off the page. Crain has picked up some of the subtle mannerisms and elements of Japanese society you might find in modern Japan (I live in Tokyo), yet he has created a world that it totally different. The character of Lula even talks about writing on paper and recording stories for future generations “that will probably speak a different speak and not understand half of what I write.” The sentiment is reflected in the art of Rai #1.

The story is steeped in science fiction, and while there are plenty of technological wonders, it is the social science fiction aspects that show real promise for the series. What happens when murders start popping up in a society that has not experienced an unlawful death in over a millennium? There are plenty of social issues to be explored in following issues, and Kindt has presented several in just the first issue.

Rai #1 is a full and deep read, but even with that aside it is well suited for multiple re-reads just on the art alone. There is a whole new world being built in the Valiant Universe, so this series should be a friendly entry into Valiant for new readers. A definite BUY for anyone interested in a new sci-fi series.

There is also a limited supply of Rai #1 PLUS editions that offer 15 pages of additional short story in the world of Rai. Valiant has said these won’t stories will not be in the trade paperback and are a reward for pull box subscribers. There was no comment if these stories will be in any hardback editions.