“Lucky to be Alive” 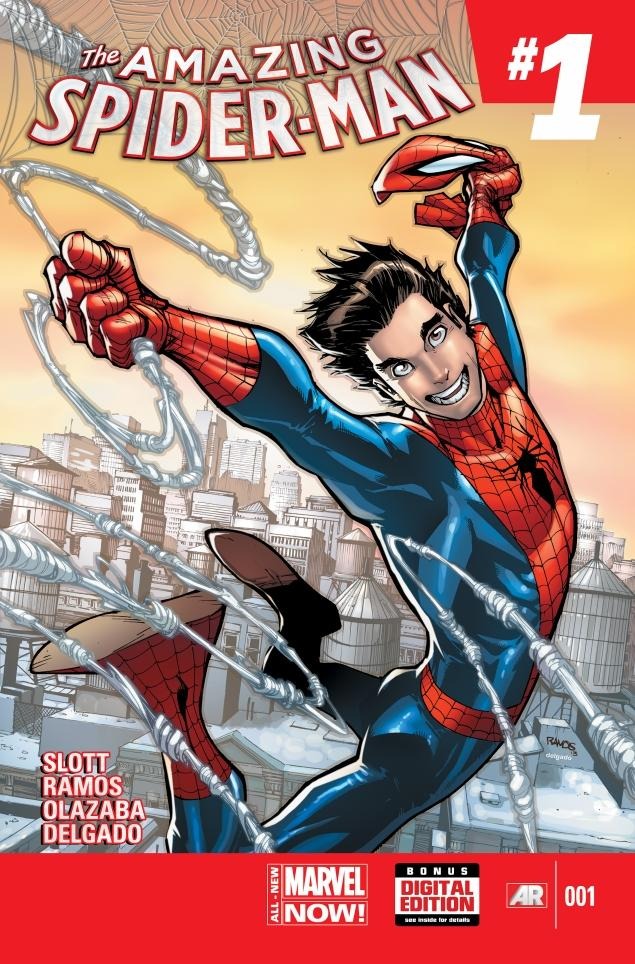 “How my Stuff Works”

The Other is gone for good! That One Moment in Time when Doc Ock was masquerading as Peter Parker is over, because he is the Superior Spider-Man No More! We’re Back in Black the Red & Blues and ready for the Big Time! It’s a Brand New Day for Peter, so let’s Clone-Saga-Gwen-Stacy-Wedding-Spider-Island-Civil-Secret-War-Ends-of-the-Earth all the way with a brand spankin’ new Amazing Spider-Man #1!!!

[Do you see what I did there?]

Oh yeah. After a critically-divisive-lauded run of Superior Spider-Man, Dan Slott continues his epic Spidey-saga with Peter Parker back in his own brain thwipping and quipping all about town. And thwip and quip Peter does, as Slott gives us a bright and back-in-the-daylight version of Spider-Man that we have barely seen the last few years. After all, that positivity-in-the-face-of-peril is one of Spider-Man’s most prominent attributes, so Slott really emphasizes the humor and the fun as he acclimates Peter to his new status quo. And this issue is really very funny. I mean, any comic in which an almost-nude Spider-Man battles an band of animal-themed crooks called The Menagerie in the midst of a Faberge Egg heist pretty much has to warrant at least a LQTM.

Now, I’m coming into Amazing Spider-Man #1 completely devoid of any substantial continuity baggage. I’ve read a few issues of Spider-Man and Superior Spider-Man in the past, but I’m not all too familiar with the specific details of the Spider-canon. I don’t know what Doc Ock did as Spidey, so I was in part just as confused as Peter is when he discovers that he’s got a PhD and owns a company and has lost favor with pretty much everyone in NYC. Fortunately, Slott uses Peter’s own ignorance as a doorway into acquainting new and reminding old readers alike of just where Superior left off and where Amazing begins. The situation is exciting, as Peter has to rediscover who he is while also mending the fences and coping with some of the more problematic disparities (Doc Ock apparently had a girlfriend while he was Peter! Gasp!). The stage is set for what should be an brilliant new series, though I do suppose that I would have had a more enriching experience had I been reading Superior before picking this book up.

The primary story is a Dan Slott/Humberto Ramos joint that follows Peter through his first few days “back” in his own body. Like I said, it’s fun, it’s funny, and it’s fairly light. There are moments of seriousness, particularly the last sequence with the most fascinating vestige of Ock’s run in the Parker body, but for the most part, Slott is giving us straightforward story in that classic “Peter Parker” tone. Humberto Ramos is, in a lot of ways, the quintessential Spider-Man artist of the 21st century. His dynamic, exaggerated aesthetic is at once action-packed and delightfully engaging. His Spider-Man is iconic. Sure, his “civilians” sometimes look alike (especially with the oversized eyes), but the man can draw Spidey webbing around the city like no one else.

The rest of the comic is filled cover to cover with six more short Spider-Universe stories. The cadre of stellar writers—Slott, Gage, David, and Yost—are joined by some of the best new up-and-coming artists in the industry today: Javier Rodriguez (Daredevil and lots of Spidey stuff), Will Sliney (Fearless Defenders), Giuseppe Camuncoli (Superior Spider-Man), and Ramon Perez (Wolverine & The X-Men). The artwork and storytelling for all of the segments is fantastic. Highlights include the Electro and Black Cat stories (both written by Dan Slott & Christos Gage). Sure, it’s convenient that Electro and Black Cat are getting featured given their roles in the upcoming film, but hey, as long as the stories are good, I don’t care—I love it! The final story runs parallel to the original Amazing Fantasty #15 and gives us a “biggest fan”-esque premise for a new character that will star in the upcoming “Learning to Crawl” story in Amazing Spider-Man #1.1.

The real star of the whole book, however, is Chris Eliopoulos. In addition to lettering the entire book cover-to-cover, Eliopoulos also pulls art duties for the “How My Stuff Works” segment of the book. The guy is one of the go-to workhorses of the industry, and his influence can be felt in visual look of pretty much every comic on the stands. Interestingly, frequent letterer Joe Caramagna writes that story, so it’s like Letterers Unite!

Buy. Even though my longboxes might not show it, I’m a sucker for the Spider-Man character, so I leapt at the opportunity to jump on with a new number one. The Amazing Spider-Man #1 is chock full of stellar storytelling, spot-on humor and characterization, and tons of amazing talent. I do think my overall appreciation of the issue could have been elevated with more prior knowledge of the Superior Spider-Man series or Slott’s earlier run, but I had a good time nonetheless! Totally worth the price tag! Check it!

PS – In addition to the seven stories in the book, there’s also the entire first issue of Charles Soule and Joe Madueira’s Inhuman and a brief prologue to the Original Sin story for Spidey!

PPS – The Marvel Universe has been around for 13 years. It has been established.