This week on Marvel’s Agents of SHIELD we get some more overlap from the Marvel Cinematic Universe as Cobie Smulders, aka Maria Hill, returns to the show. Also, all of the loose threads from the first season continue to come together as we race toward the season finale! 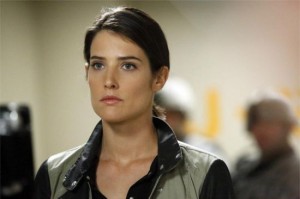 The episode begins with none other than Maria Hill herself, leaving a building in Washington, DC. She catches us up on some exposition as she walks, talking on the phone. Suddenly, the people she knew were watching her are all incapacitated. What better way to signal the entrance of the cavalry? Melinda May steps from the shadows and tells Hill the Coulson needs help. Cut to: Coulson, Fitz, Simmons, and Triplett are in the secret base, wondering what the heck happened to their plane and the rest of their team. They review some security footage that doesn’t really explain a lot, and then Simmons decides that everybody needs pancakes. In the process of finding pancake supplies, Fitz and Simmons discover the body of Agent Koenig as well as Skye’s note about Ward being a HYDRA… person. Simmons performs an impromptu autopsy and confirms that the only person who could have killed Koeng is Ward, even though no one other than Fitz was really denying it.

Meanwhile, Skye and Ward are on the plane and headed to the GPS coordinates she needs in order to unlock the hard drive. The coordinates lead them to a diner in LA–apparently the same one where Skye met Mike Peterson in the first episode of the show. Skye tells Ward that even with the coordinates, unlocking the drive will take at least an hour, which causes Ward to freak a little. However, Skye manages to hold it together long enough to stall for time and allow some local authorities to arrive. Ward goes all Jason Bourne on them, but Skye slips away. Unfortunately, Deathlok has been trailing the pair and picks that moment to step in and take control. Skye wakes up on the plane, where the cyborg convinces her to tell him how to actually unlock the drive by almost killing Ward. She spills the beans and they are off again, but not before Maria Hill, with Coulson and team in tow, can confront the plane and try to get them to stand down. All of this is really just a diversion for Coulson himself to sneak onto the plane to rescue Skye, at which point Agent Coulson becomes my new favorite superhero. They manage to escape, but only just, by jumping out of the plane–in a scene that was seriously the most awesomely fun thing I’ve seen on this side of Captain America 2. The episode wraps up with Ward and Deathlok still in possession of the plane and the drive, but the rest of the team back together again. They have time for one more surprise and a quiet moment in a motel in LA before fade out. 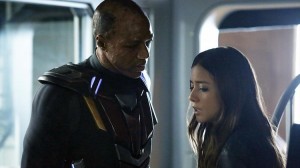 What Nothing Personal does really really well is to establish a Grant Ward that we can hate. Since he’s turned his coat, Ward’s actually been a lot better character, and I know more than one person who has wanted to root for him despite the overwhelming proof that he’s a HYDRA stooge. Now that he’s on the plane alone with Skye and we all know that he’s a baddie, things actually get really creepy. All of us watching know that it’s only a matter of time before Ward finds out that Skye is onto him, and each passing scene makes that encounter more and more terrifying. Kudos to the writing staff for recognizing that HYDRA Ward was getting too likable and stepping up to fix it. I found myself wanting Ward to get his ass handed to him by Deathlok for most of the episode, which is a big turn around from the previous three. I am still looking forward to getting to hear Ward’s story in next week’s episode so that we’ve got some backstory behind him, Garrett, and what drove them all toward HYDRA.

Once again, Agents of SHIELD shows that it’s best when it’s crossing over with the Marvel Cinematic Universe without allowing it to overwhelm the show itself. Cobie Smulders does a great job as the newly privatized Maria Hill, who gets to kick a little ass and sling some witty banter, but not before Coulson reads her the riot act for abandoning her post. At this point, with the events of Captain America: The Winter Soldier still resonating through every frame of the show, the universe that SHIELD inhabits feels appropriately large–to the point of being oppressive. This adds a wonderful tension to everything that Coulson and his team do, and Hill herself has to remind the super agent that there is no one left to help them–no more backup, no more secret bunkers. It’s just them against the world.

Watch it. I hope that SHIELD can keep up this level of quality for the next couple of episodes and end the season nice and strong. I know that everyone is assuming that the show will be renewed for a second season, and while I also believe that is true, the official renewal still hasn’t been handed down. So, warm up your sets for the next two weeks and follow along as Agents of SHIELD comes crashing into the station for its big finale!