What exactly do I mean when I say ‘The Gaze’? Okay, we’re going to get kind of deep here for a minute, so just bear with me. The gaze refers to part of a psychoanalytic theory by Frenchmen Jacques Lacan, and the anxious state that comes from the awareness of being viewed. This was the basis for film theorist Laura Mulvey’s concept of ‘the male gaze’ in her 1975 essay “Visual Pleasure and Narrative Cinema”. Here Mulvey posits that women in film were constantly being objectified because heterosexual men were the ones controlling the cameras. So when a woman walks in slow motion out of the water, or Megan Fox is bending over the hood of a car, or any time the camera lingers on the curves of the female body, these are all examples of the male gaze. It is fairly easy to see how this translates to comic books, a notorious medium for depicting women in ridiculous poses, revealing outfits, and sexualized to an extreme. While there have been improvements in the past 5 – 10 years, this idea of the gaze is still worthy of investigation in modern comics.

It certainly isn’t hard to find comics that feature the objectification of women on their pages. These depictions seemed to be especially bad in the 80s, 90s, and early 2000s, which is not to say it isn’t still a problem today. Characters like Marvel’s Psylocke, Emma Frost, and DC’s Power Girl are prime examples of characters who are almost always in a state of objectification. One of the most well known artists culpable for hyper-sexualizing female characters is Rob Liefeld. Whose work in the 90s and early 2000s is famous for being ridiculous; the men’s muscles had muscles and the women would have to dislocate their spine to be in the positions he drew them in. While most artists are not as notoriously bad as Liefeld, that doesn’t mean that female objectification hasn’t been incredibly prevalent. There are some characters that are specifically sexualized more than others, such as Catwoman, Black Widow, The Scarlet Witch, Power Girl, and others. These characters are regularly seen in positions so that the viewer is able to see their breast and rear at the same time, when most of these are incredibly anatomically incorrect. There has even been a parody of this called “The Hawkeye Initiative”, where people 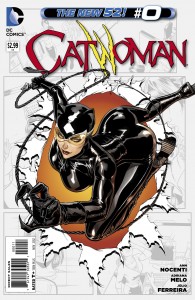 draw the Marvel character Hawkeye in the positions that women are drawn in. Not only are women seen in ridiculous ways physically, they are also usually wearing very little clothing. Either something resembling a one-piece bathing suit like The Scarlet Witch, a skintight bodysuit like Catwoman, or with their rear almost completely bare like Psylocke.
In the last few years this is becoming less and less the norm in comics. You have major titles like Saga, Batgirl, Thor, Black Widow, The Wicked + The Divine, Batwoman and many more that are trying to depict their lead characters as realistic looking women, instead of purely sexual objects. These are still all characters that are drawn as incredibly attractive, the difference is that they are starting to become more and more well rounded as characters, and not solely defined by their absurdly drawn bodies. That is certainly not the case across the board though, many of the top titles at Marvel and DC, such as Avengers and Wonder Woman, still are depicting female characters in ways that are far from ideal.

It’s definitely easy to dismiss this as just part of our culture. Women are objectified in film, in music, in advertisements, so why should comics be any different? Well, much like all those other mediums, women are a huge portion of the products’ consumers base. Recent market research has shown that up to 46% of current comic book fans are female. With more and more girls and women reading comics, more titles featuring women as protagonists, and more women writers and artists, could there possibly be comics that feature a female gaze?

So as one would assume, the female gaze is sort of the opposite of the male gaze. It is where whatever is being looked at is depicted from a female spectatorship, and the objectification is directed towards a man. There are some issues when comparing this idea to the male gaze though. Because most writers and artists are men, the male gaze is typically considered default for something directed towards a mix-gendered audience. So when talking about a female gaze, it is usually in reference to something aimed exclusively at women, such as chick-flicks or soap operas. There are certain titles out that arguably buck this traditional approach, such as Jason Aaron’s run on Thor and Matt Fraction’s Hawkeye, both of which have male writers and artists. What we see in these books are a distinct lack of objectified women, in fact in Hawkeye, the co-protagonist, Kate Bishop, is notably drawn in a t-shirt and jeans or a loose fitting costume most of the time. In Hawkeye #3 Clint is seen the morning after a one-night stand, and it is his scantly clad body that is the focus of the panels, not the woman’s. And in Aaron’s Thor: God of Thunder Thor shows off his impressive godly physique on numerous occasions throughout the series, while rarely do we see a female character in nearly as many states of undress. And in contrast, in the latest iteration of Thor (where the protagonist is a woman), she is fully clothed and not sexualized at all.

To Gaze or Not to Gaze

So here’s the thing, objectifying someone in film, TV, comics, is not inherently a bad thing. As humans we are sexual creatures, and when viewing someone of the sex you’re attracted to, in some form of entertainment, it’s normal to want to find that person attractive. The problem is when the character is being solely defined by their sexual appeal, as was, and still is, the case with so many female characters in comic books. So when girls want a well developed character that they can relate with or look up to, they are left with little to choose from. This is also why there should be no objection to male characters being objectified, most characters from the Big Two are so fleshed out that it is nearly impossible to reduce them to just their “manliness”, especially when it’s characters like Thor or Hawkeye. There are other qualms with the idea of the gaze, such as it being incredibly heteronormative, but as a whole it is an interesting and useful way to look at comics. Especially as we continue to push the medium forward in terms of equality and representation.