(Warning: some mild spoilers in the synopsis, however, major spoilers have been avoided.) 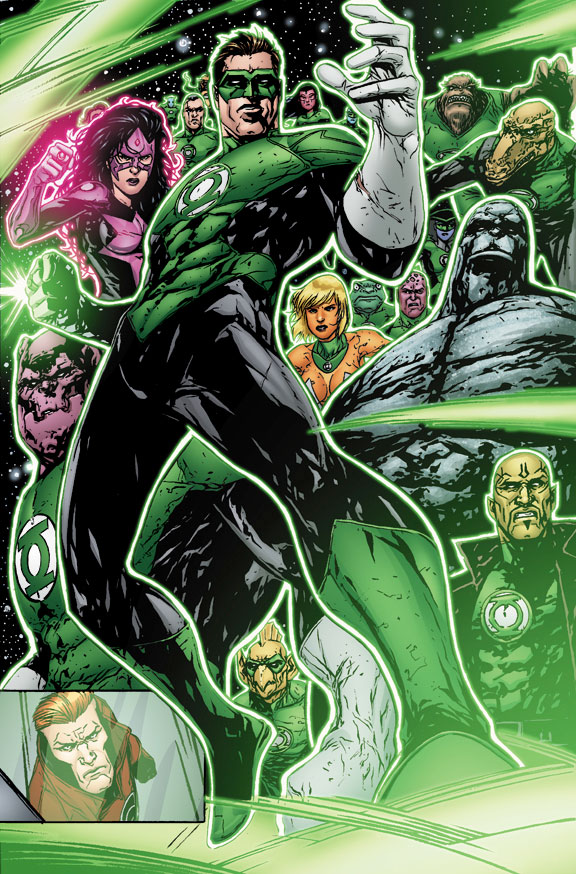 Geoff Johns is a tough act to follow. Even more so when it comes to Green Lantern, a title that he almost single handedly revived and turned around. Those of us who were reading Green Lantern at the end of the Johns run were understandably dubious when Robert Venditti was announced as the new writer for the series. However, Venditti took the reigns with grace and it seemed like he was going to keep things on track. But now, just a scant four issues later, the Lantern universe is going through another shake up, and I can’t help but wonder if this is Venditti’s opening salvo to tear down the castle that Johns built and make his mark on an iconic character.

If you have not been reading the Lantern books lately, let me recap the story up to now. In the pages of Green Lantern: New Guardians, Kyle Rayner, now the White Lantern, is playing tour guide to a new group of guardians–those who have been imprisoned for centuries. They journeyed out to the very edge of the universe where they encountered a fleshy mass of unknown origin called The Anomaly. The guardian of The Anomaly, Exeter, attacks the guardians and Rayner has to defend them, but his white light disrupts something within The Anomaly and it shatters. Relic, a character created by Venditti and artist Billy Tan, emerges from within. He was formerly a scientist from the universe that existed before the current one, and he blames the destruction of his universe on what he calls the Lightsmiths: beings who wielded the emotional spectrum in much the same way as the various light corps do now. Relic decides that he must save the current universe by destroying the lightsmiths, and as such declares war on the corps.

Beginning with the blue light of Hope, Relic intends to travel to the home worlds of each corps and drain their power batteries of power, thus leaving them helpless and, in some cases, dead. On Oa, the Green Lanterns are still recovering from the battle with the first lantern (completed with Johns’s final issue, #20) and are no match for Relic when he comes to call. Left with little to no power, Hal Jordan and the rest of the corps decide to travel to Ysmault, the home of the Red Lanterns, with the hope that the reds can succeed where the other corps have failed.

Which brings us to this week’s issue of Lights Out—Red Lanterns #24. Guy Gardener has defeated Attrocitus and become the defacto leader of the Red Lanterns. He’s also not too happy with Hal. When the remains of the corps show up looking for help, the reds are not too excited to step up. There is a small skirmish, but the greens are too weak to put up much of a fight. Hal appeals to Guy and they strike up a deal. Meanwhile, Kyle Rayner is collecting the entities of the various color spectrums–the sort of animal totems for each color and corps. And with them, he intends to help Relic! What I really want to know, however, is where is Sinestro and the yellow entity, Paralax?!

The final issue of Lights Out will be Green Lantern Annual #2, on sale October 30th, which I’m expecting to be a bit oversized. The solicits say that this will establish the new status quo for the Green Lantern universe. I’m expecting a death or two. What’s interesting is that we haven’t really gotten much shake up thus far. One event was a little surprising–which I did not spoil in the synopsis above–but all in all these issues have been mostly build-up. I’m just hoping for a solid payoff.

A word on the art: overall, for having so many artists work on these books, the art is both consistent and decent throughout. The weakest of the books is probably Red Lanterns, while I found Green Lantern Corps to have the most visually interesting style of the group. Colors throughout are great as usual, and the light effects, as I’ve said before, are top notch.

While the last four issues of Green Lantern have been pretty good, the other titles have their problems. I believe that, if you are the type to really be interested in what is happening with Green Lantern going forward from here, you should be able to pick up Green Lantern Annual #2 and get the idea about what is going on. However, I feel like the Lantern titles have carved out their own little corner of the DC Universe and have been contented to stay there, isolated from everything else. If you’re not a GL fan, or if you’ve fallen off the wagon, I have a hard time seeing how there is anything here that is so Earth shattering that it can’t wait for trade or even just a recap from a friend.