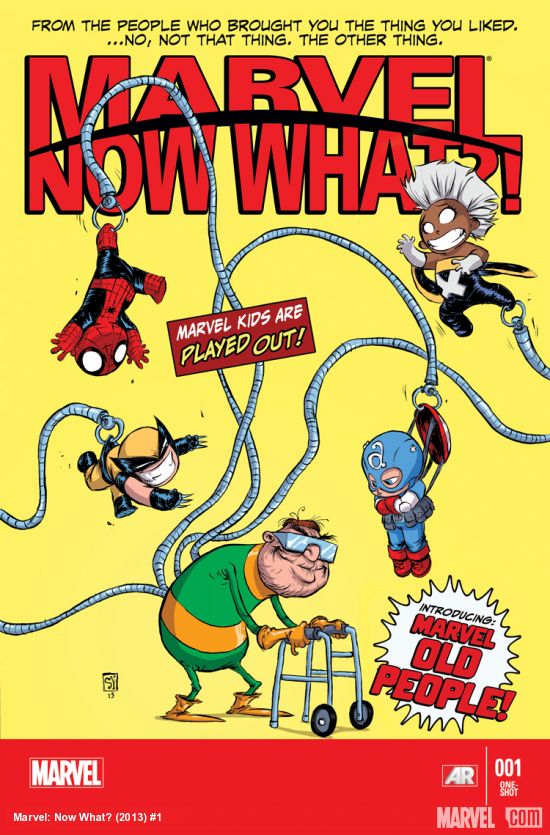 How much would you pay for a laugh? I don’t know that I can answer the question for myself, but it’s something I thought about as I read through Marvel Now What?!, a one-shot anthology of short stories meant to poke fun back at Marvel. It’s cute in places, funny in others, and so on, but I couldn’t help feeling a little cheated at spending $3.99 on a comic making the same old jokes that have been circling internet comments for months. There are places you can get this same kind of humor, better even, and for free.

Here’s a quick run-down of what you’ll find:

Now What?!: Words and Art by Scottie Young, Color Art by Jean-Francois Beaulieu
The first and last pages of the book are Scottie Young making fun of his cash-cow baby covers, suggesting that the next wave will be Marvel Kittens. The cover carries a similar joke. Not much to see here.

Marvelpocalypse NOW!: Written by Elliot Kalan, Art by Jacob Chabot
This is probably the best couple of pages in the book. It features the High Evolutionary exposing the details of Marvel NOW!, how it differs from Marvel then, and how it will become even more NOW! in the future. Some pretty funny and a little scathing commentary.

The Puppet’s Master!: Written by Gerry Duggan and Brian Posehn, Pencils by Pat Olliffe, Inks by Livesay, Colors by John Kalisz
This five-pager seems to be offering some kind of alternative origin to Doctor Octopus. The art is fun as it’s supposed to look like a much older comic with old coloring methods, but I can’t for the life of me figure out the point of the story.

X The Academy or School of Hard X, From Asgard With Love, and Who Watches the Watcher?: by Cenac, Kalan, Coover, and Brenan
These three one-pagers are part of something called Marvel Wy-If, which seems to be comedians Wyatt Cenac and Elliott Kalan asking silly questions about the Marvel Universe, like why doesn’t anyone ever graduate from Xavier’s school and what happens when Storm and Thor try to use lightning at the same time. They’re cute and amusing, but ultimately forgettable.

One For The Team: Written by Lucas Hazlett, Art by Jacob Chabot
Professor X calls the X-Men in to have a class in improvisation from Brandon and Brenda. This one is really out of left field and didn’t do much for me at all.

Cap-Fished: Written by Sara Schaefer, Art by Steve Lieber, Colors by Rachelle Rosenberg
Captain America sits in a coffee shop waiting to meet the woman he’s been talking with online for months. Of course, since he’s not from around here, he gets duped. This was the only short other than Marvelpocalypse that made me laugh out loud. Cute, funny, and fun.

Ladies Who Brunch: Written by Sarah Benincasa and John Devore, Art by Tania Del Rio, Color Art by Andrew Dahlhouse
She-Hulk, Wasp, and The Invisible Woman sit down to brunch, only to have it interrupted by Dr. Doom. However, even though the ladies defeat the villian, Thor ends up getting the credit. This was a cute attempt to get at some of the sexism in comics, but falls a little flat, especially since most of the women have series on-going or coming soon. Some of the best art in the book, though.

And Finally!
Intervention: Written by Scott Adsit, Art by Declan Shalvey, Colors by Jordie Bellaire
The council of watchers stage an intervention for the Watcher of Earth to curb his addiction to… intervention. Some funny lines, like “…why can’t I say ‘no’ to Reed Richards?” as The Watcher goes through the steps to a cure. Some fun art here also, again meant to look like an old, silver-age comic. Ending could have been better.

Skip it. For the most part, the book has a serious “So What” hanging over the top of it. One or two of the shorts tried to make a point of poking fun at Marvel and the industry at large, but most were just one-offs that don’t seem to tie to much. If you’re interested in some similar parody but with some actual bite to it, check out the newly restarted The Gutters (www.the-gutters.com).