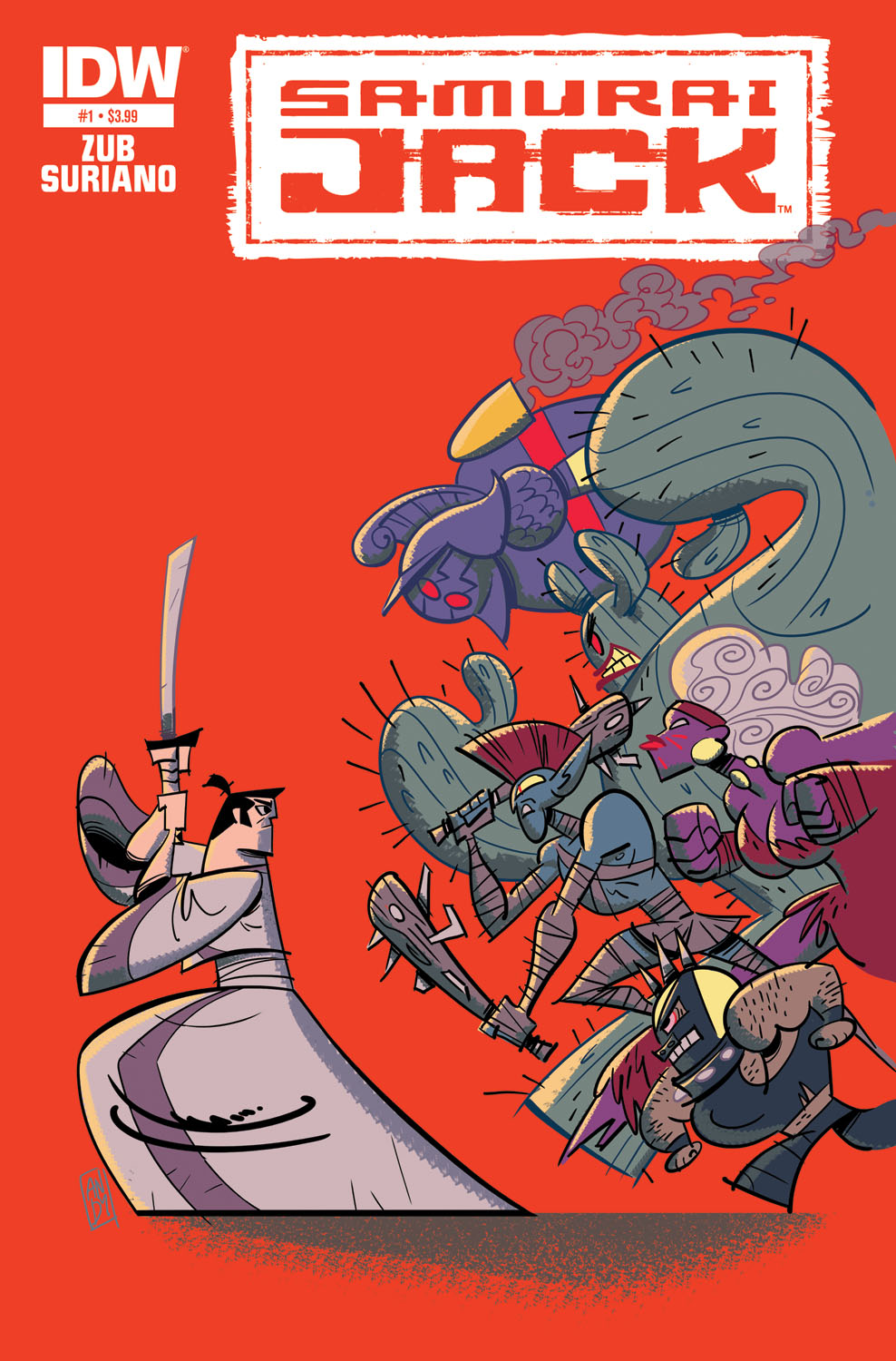 “Back from the past.”

The Samurai Jack cartoon series ended in 2004, but we still remember. The style and sensibility that Genndy Tartakovsky brought to all of Cartoon Network in those early days still resonates through the world of animation in much the same way that Bruce Timm’s barrel chests and angular jaws still inspire the world of DC’s direct-to-video cartoons. Fans of Samurai Jack and of that early Cartoon Network animation should take notice of IDW’s new comic series with the enigmatic warrior, but beware: you may not find everything you’re looking for.

Issue one begins the 5-part arc called “Samurai Jack and the Threads of Time.” Our hero is still looking for a way back to his own time, and this arc promises him a possible way there. The threads of time are pieces of the Rope of Eons, which the demon Aku shredded after learning how to time travel. If Jack can reunite the threads of time, he can travel back to his home and defeat Aku before the villain can take over the world.

Confession: I haven’t watched a lot of Samurai Jack. I’ve seen the three part opening to the first season and a few random episodes along the way, but definitely not the whole series. That being said, I think it’s pretty easy to grasp the tone and style of the show, and this is where I think the comic falls just a little short. What makes SJ great is that no matter how weird or complicated the place he finds himself, Jack is unwavering–a monk in a savage, anthropomorphic, and psychedelic world. In the comic, however, Jack just doesn’t seem to be the man I have seen previously. He smirks a little more, reacts to the strangeness around him a little more, and is generally just a little off character. There is one page where we even hear his internal dialog, which, while useful to understand why he makes a certain decision, took me right out of the story.

I’ve read some of Jim Zub’s work in Skullkickers before and always felt like he plays too much for laughs. He doesn’t seem to have that valuable sixth sense for when to crack the joke or when to just let the moment be. Unfortunately, this is a lot of the bread and butter of Samurai Jack–valuing the silence and the quiet introspection of the character.

Art in this series is being handled by Andy Suriano, who is one of the original character artists for the Samurai Jack cartoons. And it shows. Some of the pages look more like story boards for a SJ show than an actual comic. Pages can be alternately gorgeous, messy, funny, and just a little weird. The art is also fascinating as a sort of look into where Jack came from–his pre-genesis. And who better to capture the strange world and stranger creatures of this series than one of it’s founding fathers?

Wait and see. If you are a fan of Samurai Jack, you owe it to yourself to give this a shot. There is a lot to like. If you are a fan of animation and the types of cartoons that Jack represents, you should also take the plunge. However, if you’re just looking for something to pass the time on a sunday afternoon, I think you can safely miss this one.