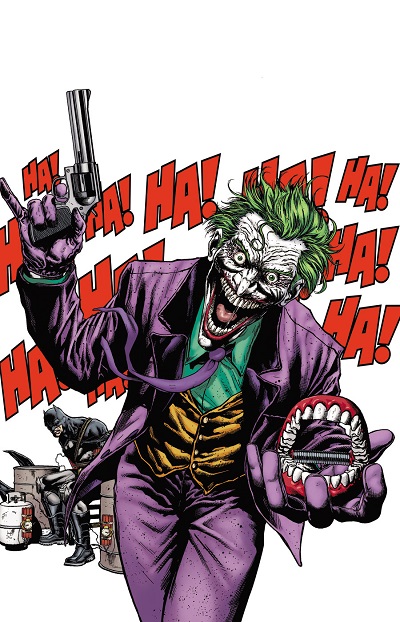 The Joker is one of the most complex villains ever to grace the pages of a comic book.  His natural impulsiveness, devious intelligence, and disdain for order and structure give him a seductive quality that sometimes casts him in the role of the antihero.  But just as you begin to get sucked into that allure you see the other layers: his cruelty, his disregard for human life, and his penchant for scarring people (both physically and mentally) so that their lives will never escape his touch.  Rarely do we get a story that tries to shed some light on the origins of his fractured nature, but that’s what we get  – with varying levels of success – in Joker #1.

The issue opens with a flashback where we get a glimpse of the horrible childhood abuse the Clown Prince of Crime had to endure at the hands of his insane Aunt.  From there we fast forward to a young post-acid bath Joker, who is in the midst of terrorizing the Gotham City Zoo.  It is here that he encounters a mother gorilla and her baby, whom he promptly makes an orphan and then adopts.  As we watch Joker play father to the growing ape, now named Jackanapes, we get more looks into the clown’s troubled past and watch as he twistedly tries to reconcile that past with himself.

It’s pretty obvious that Andy Kubert made a conscience decision not to play it safe with this story.  Besides the dark and disturbing subject matter, the territory he explores (Joker’s terrible upbringing and bottled paternal feelings) and his attempt at using those concepts to not only represent the Joker’s fractured psyche but also to show the tiny shred of humanity that may still linger in the clown is pretty gutsy.  This is something that only a few writers have been able to do well, but he runs at it with an admirable level of confidence.  And in a few instances, Kubert’s attempts succeed.  True, the memories of Joker’s childhood may be just another fabrication that has come out of his constant self-reinventions, but they still pack an emotional punch that is hard to ignore.

That’s not to say that all of the creative decisions made in this issue work.  Probably one of the hardest things to do with the Joker is to write internal dialogue for him because it takes away so much of his mystery.  Part of what makes him wonderful is the feeling that you can’t begin to imagine what is going on behind those green eyes.  Making the Joker the narrator of the story pulls back that curtain, and it’s a near impossible feat to make what we find match the expectations that have been built up.

In terms of artwork, this is one of the best portrayals of the Joker in recent years.  Andy Clarke’s meticulous attention to detail is evident here, especially in the clown’s facial features, which communicate so much more than words can say.  Clarke captures Joker’s moments of terrifying rage and heartbreaking brokenness beautifully.  His work is definitely the biggest highlight of the issue.

Buy this one.  It has its flaws and may have things you’ll disagree with, but Joker #1 succeeds in not only giving us a side of him that we haven’t seen much of before, but also in presenting us with a tale that may linger in your head long after you’ve finished reading it.