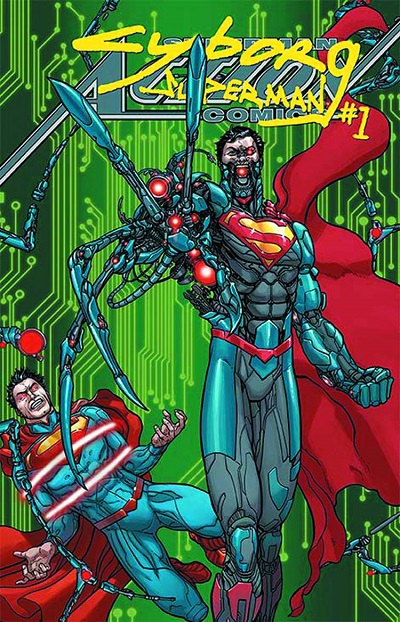 Better titled as Supergirl 23.1, Action Comics: Cyborg Superman picks up the ball after the bombshell reveal of the titular character’s identity in the last issue of her title.  But, willing to run with the new direction that the New 52 reboot allowed two years ago (an opportunity that the company has been rather reserved overall in utilizing), we now get a new backstory to replace the easily argued convoluted one that he was saddled with before.  But, as with all change, it comes down to one simple question; is it for the better?  Lets find out as we take a look at Action Comics 23.1: Cyborg Superman!

With a healthy helping of scenes taking place before the fall of Krypton, this villainous issue details the conflict between the brothers Jor-El and Zor-El as they both seek their own methods to save the people of Krypton from its inevitable doom.  With Zor-El’s methods utilizing technology from another antagonist of the DCU though, not everything turns out as planned.  And, in the wake of utter devastation, creation finds its way; as a new type of Kryptonian takes to the skies in its quest for perfection.  But who is the arbiter of said perfection?  And can there be such a thing within a universe of flawed creatures?

Lets just go ahead and put all of our cards on the table.  This has nothing to do with the current or past storylines taking place in Action Comics.  It is entirely linked to the current arc in Supergirl at the moment.  Secondly, this is not the Cyborg Superman that many of you know from the previous continuity.  This is a wholly separate entity with no link whatsoever to Hank Henshaw.  So if change is something you are resistant to, this may not be aimed at your tastes.  But, regardless of the above, what we get here is a much cleaner introduction to a somewhat iconic villain wrapped up within a decent story of pathos and sympathy.

I’ve been an unapologetic fan of what Michael Alan Nelson has done with the Supergirl title since he took over.  While there, he has shown himself capable of crafting a solid story with a dash of playfulness that has turned the title around in my opinion.  Here though, he shows only half of that combination, as the story telling remains strong even as it jumps back and forth through time (though clearly annotated so as not to lose readers), but due to the nature of the story all playfulness is gone.  In its place, there is a sense of pity for the villain overall, even through his heinous acts clearly depict his current iteration as less than remorseful.  This is done almost entirely through dialogue in the flashback scenes, and really showcases some of the strengths of his writing.

Helping to push this story along visually, Hawthorne’s pencils can be called vibrant, expressive, and detailed.  As most of the story revolves around the emotions that drive these various characters as well as the reactions to their outcomes, it required someone capable of delivering panels that could express such so that the prose could do their job unimpeded.  In that light, Hawthorne succeeds quite well in most cases.  There were 1-2 panels that looked a little odd in the way of perspective, but this may have been a creative decision to put the items in the forefront that the story required; and are easily overshadowed by the work done with the characters to make their plight feel more complete.

If you like Supergirl, a definite buy.  If you are curious about the new direction of Cyborg Superman, also a buy.  If you are looking for Action Comics 23.1…not a buy.  For all others, this issue contains a fairly self-contained story that cleanly delivers an entirely new origin for the titular villain while also looking at the other side of the El-tracks on the dying Krypton.  So if that intrigues you at all, this issue is well worth a read.