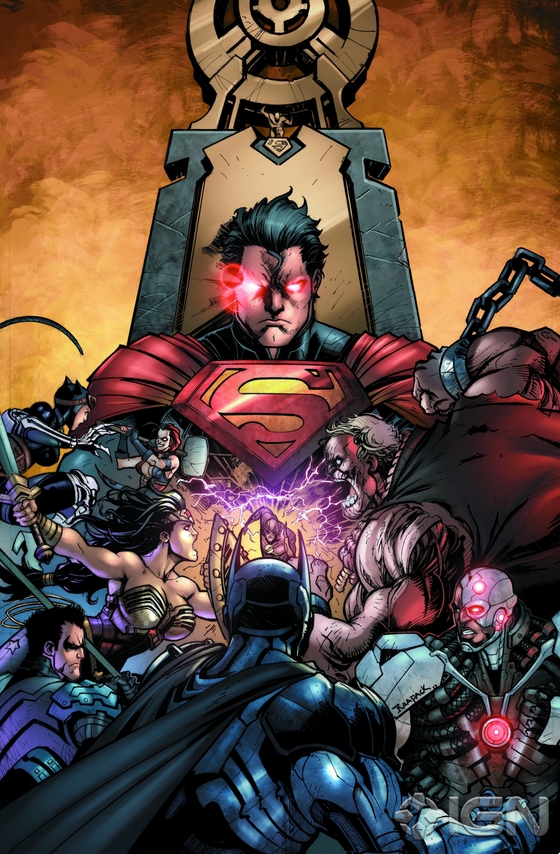 We’ve all the conversations before: “Superman vs Batman? Green Arrow vs Wonder Woman? Bane vs Deathstroke? Who would win in a fight?” Well Netherrealm Studios, the people behind Mortal Kombat, are attempting to answer that question with the release of Injustice: Gods Among Us. Injustice is a fighting game that takes place in the DC universe and pits an all star cast against each other in one-on-one combat. But I’m not here to talk about the game. In an intriguing decision, DC announced that they would be releasing a comic book prequel series that would be released in chapters every Tuesday (starting today). Tom Taylor (Star Wars: Invasion) would be handling the writing with Jheremy Raapack handling the art. Tom sat down with IGN and explained why you should pick this up, despite being based on a fighting game.

” …fighting games aren’t typically known for their narratives they’re more known for sudden, irreparable, spine-removals. However I’m happy to report that in between all the brutal punches, kicks, whips, knives, claws, arrows, blood, people being pounded through buildings, batarangs to the face, and super-powered uppercuts that can launch a person into orbit, the writers have written an incredible story.”

In terms of what the story is, he had a pretty simple explanation for all those interested.

“The Injustice game sees a new world order where heroes are pitted against heroes in a world gone dark. Our series begins five years earlier and shows the torturous, tragic events that lead to this place in time.”

Despite taking place in an alternate continuity where all these heroes fight each other, Tom wanted to keep the essence of the characters alive and really focus on making them true to the characters we know and love.

“I have a lot of respect for these characters and I don’t want to cheapen them in any way or write them acting in a way that I know they wouldn’t  Yes, the characters will be significantly changed by events and circumstances but I’ve wanted to make sure that this is a slow, natural change in personalities and principles.”

When asked some final thoughts, and inadvertently what the target age range for this book would be, Tom had this to say.

“This series is brutal and nasty. Any fans of my all-ages adventure series The Deep (about a multi-ethnic family of underwater explorers), this isn’t the book you give your kids after that one. In fact, I’d like to apologize here and now to my own kids for what daddy did to the superheroes.”

I’ve had a chance to play Injustice multiple times now and I can tell you its shaping up to be something pretty special. If the comic can even be a tenth as good as the game, I know it will definitely be worth buying. Tom has a great knack for long stories divided into chapters and it’s obvious he didn’t want to do a cheap license tie-in just to get a quick buck. He’s definitely putting his heart into this series and is crafting an interesting world that’s sure to keep me interested, even after the game has been released.

Injustice Gods Among Us: Chapter One is available today, with every subsequent chapter released every Tuesday and a print edition on the last Wednesday of every month. Let us know what you think in the comments below.