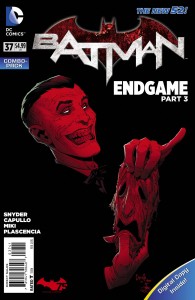 Stare into darkness, and darkness stares back…

The Bat. The Dark Knight. The Caped Crusader.

Everything about Batman is legend. His entire purpose and approach to heroism is becoming something more than just a man. While you have Bruce Wayne, who is temporal, Batman is eternal, so to speak.

And after 75 years of stories, who knew that the setting of Batman, the great, grimy city he protects, Gotham, could garner any more world building. Scott Snyder and his wonderful art team are doing just that. Everything about Scott Snyder’s run on Batman has been about Gotham—he’s mentioned this himself on the podcast before. This story—a story about the Joker unleashing a toxin on the city, forcing everyone into laughter and terrifying smiles—isn’t an untold story. From Joker’s very beginning, his entire history, he has used such toxins. It’s as famous as his punchline (the literal boxing glove punch) and his “BANG!” pistols.

So, what makes this story any more unique, or even important to the overall Batman mythos?

History. More and more of that glorious Gotham history.

Batman is legend. He is the dark figure in the night that keeps you honest. His existence means that the people of the city can rest assured that they are not alone; that they have a fighting chance against the forces of evil.

The forces that laugh.

But what about that laughter? That sound immortalized by Ha ha’s and Hee hee’s on the page, or piercing wails from the great Mark Hamill. Or even the late menacing Hee Hee’s and Ho ho’s from Heath Ledger? We know that laugh. We know it’s tune, it’s haunting and dissonant melody.

We know the man who laughs.

While the Batman is legend in Gotham, a hero to rise to. The Joker is myth incarnate. And now his mark has arrested the lips of all the people. Now his smile wrinkles every face. His wild, mad eyes haunt the hearts of the weary.

His laughter chills the air and stills every breath.

In Zero Year, we read a very different Bruce Wayne; a different bat. He was young, he was a bit reckless and he wasn’t near as calculated as he is to become. Now, in Endgame, we return to a Batman who is battle-worn. His strengths and wits have been tested and he has not been found wanting. His jaw is strong as ever and his resolute shoulders menacing in the silhouette of the night lights, the ever watching moon. But his eyes…there’s something different about his eyes. Something that spells of manic, of surprise…

…and maybe even fear.

I have read The Walking Dead; I have watched The Walking Dead, 28 Days Later; I have endured many viral infections in fiction, I have experienced much in the form of human horror displayed in story.

Nothing, and I tell you nothing, has ever had curdled my blood quite like this book. The sound of people laughing in the streets tweaks my neck and sends my skin crawling.

And I have no Bat Signal in the sky to save me from that laughter.

Scott Snyder is crafting a Batman story to end all Batman stories. His script alone is magnificent, but coupled with the stellar pencils of Greg Capullo with the confident inks by Danny Miki and the entrancing colors from the great FCO Plascencia, we find a Batman story that is as visually striking as the prose that litters the page. You don’t want to miss this.

Gory, bloody and creepy, the backup of this issue, still written by Tynion IV, is a wonderfully spooky look back at the legend of Gotham’s first laugh and what that spells for the present.