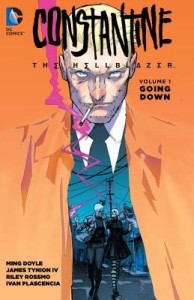 Pacts with every major demon lurking in the underworld. Broken relationships and dead friends. Lung cancer. Alchemy and marriage. A failed New 52 rebranding. And still he’s back for more. There’s just not a single thing on Earth or in Hell that can keep John Constantine down!

The Laughing Magician’s first trade release since his rebranding as Constantine: The Hellblazer, opens with John stark naked and covered in blood using his personally perfected brand of con-man magic to secure himself some new clothing. From there we see him flirting with a handsome cafe owner, shagging a familiar demon, and being a right prick when he’s tricked into helping said demon. Constantine has his hands full in all six issues that the trade collects as he’s dealing with the literal ghosts of his past. He reminisces about his punk days as the lead singer of Mucus Membrane, escapes a creature that loves him so much it hates him, severs yet more friendships, and just narrowly escapes getting eviscerated by feral wood nymphs. All while trying to charm his way into anyone’s pants that catches his eye and run a (mostly) legitimate occult detective business.

Whether or not the series will ever revisit any of the storylines that the original Hellblazer did is unknown but the new storylines do not disappoint. A few changes that’ll irk any veterans of the series are that he now lives in New York instead of the UK, his trench coat is far too short and he’s censored. If anyone needs use of the f-word it’s Constantine, but that’s to be expected now that it’s being published under DC and not Vertigo. Aside from some small stylistic changes though, it still retains a very Hellblazer feel. Veteran fans and newbies alike will be able to delight in seeing John suffer his way through his newest adventures. And yes, newbies to the series, you will delight in the suffering. The Hellblazer fandom has always been one centred on a sort of sadomasochistic vibe: morbid curiosity at the very least. While the first six issues offer up relatively safe storylines compared to some of his past ones (Son of Man immediately comes to mind as I search my vast mind palace of disturbing things) I’m sure as writers and artists cycle in and out we’ll be privy to some truly distasteful, alarming, and just plain not right Hellblazer stories!

The art in the relaunched Hellblazer is a lot cleaner than the original was. Constantine has always had an ever fluctuating art style as every few issues a new artist would come in to animate his ghoulish exploits. There’s never really been a set way to draw him, besides the tie, trench coat, blonde hair, and cigarettes, and it’s always yielded some interesting results. Not always the prettiest art to look at, but always interesting. This time around with Riley Rossmo as the main artist for the current storyline, it’s almost cute. There’s colour and brightness within the exaggerated style, which is a little cartoony but not ridiculous. It brings to mind pop art, but dingy, semi-corrupted pop art. It’s a style I can’t say I’ve ever seen applied to Hellblazer, and with over 300 Constantine adventures currently in print, it’s quite a feat to be able to do something completely fresh within the series.

The Verdict
Buy it! It’s John Constantine after all! After the disastrous New 52 reboot, this new title is a breath of fresh air as he gets back to the nitty-gritty of occult detective work with his con-man attitude and antihero ambitions.