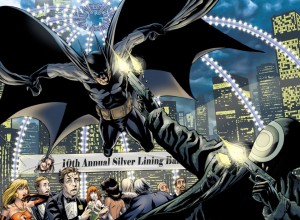 Today on Facebook, Kevin Smith posted an image of the Dark Knight fighting the villain Onomatopoeia and claiming, “Fat Man on Batman” along with the photo. The photo is drawn by Walt Flanagan who you may or may not recognize from AMC’s Comic Book Men where Flanagan is the Stash’s manager. Smith posted a bit more information with the photo. “A few years back, DC Comics made my dream come true when they let me do a BATMAN comic book mini-series with one of my best friends – COMIC BOOK MEN Stash manager, Walt Flanagan. It started with BATMAN: CACOPHONY, it continued with BATMAN: THE WIDENING GYRE, and in 2013, the blood will run in the final chapter of the battle between Batman and Onomatopoeia. BATMAN: BELLICOSITY, Summer, 2013.”

Not much else is known about the series at this point but you can be sure that when there is you can find it right here.