THE MOVEMENT #12: HAIL AND FAREWELL 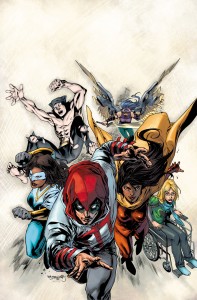 With this week’s twelfth and final issue, The Movement by Gail Simone & Freddie Williams  II comes to a sad conclusion in that the series is ending far too soon, but for those who have been reading this masterwork of comics story-telling, this tale will provide a satisfying and deeply emotional way to bid “Adieu” to our new friends Virtue, Katharsis, Tremor, Vengeance Moth, Mouse,  and Burden.

My thoughts are that this is a perfect final issue; it ties together threads as disparate as the long-running sub-plots of the Cornea Killer and uptown antagonist James Cannon, as well as a look back to Young Holly (Virtue) and then-Patrolman Meers, and in a way that doesn’t seem forced or rushed, as if this was the plan all along. We are given new information about some of our main characters that puts many things into a new perspective, and when added to the insights we’ve already been afforded thanks to Ms. Simone’s writing, moments such as those between Holly and the Captain are positively resonant. This is not to suggest that the book is short on either action or humour, as they are both here in their usual perfect balance (“You hit Mrs. Finnlemore!”), delivered in grand style by the fabulous art of Freddie Williams II and colorist Chris Sotomayor. My one complaint would be that this final issue isn’t long enough by half; granted that each of our main characters has had a turn in the spotlight as the series wound down, but I would have loved each of them to have been able to take a “curtain call”.

In many ways, for me this series is summed up by the words spoken by Virtue whilst describing her motives for starting “The Movement”. and they ring out as a leitmotif for the series, and as an indictment of what far too many super-hero titles are missing:

“I had this silly little dream. I thought that we might be part of something better…where people cared about each other…where compassion wasn’t a weakness…where those people in power helped people, without judgment. I thought maybe we could remind people, you know? That it’s OK to care.” 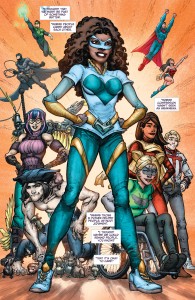 Throughout the series’ 12-issue run, those sentiments would be reflected in the over-arching theme of this rag-tag assemblage of young heroes taking it on themselves to protect the people of their hardscrabble home in “The ‘Tweens”, the area of Coral City mostly neglected by the higher-ups, excepting as a venue for exploitation. Despite this grim circumstance, or perhaps because of it, the members of “The Movement”  became a family, and Gail Simone gifted us with the most inclusionary clan in comics history, where amongst their six core members, there was only one who could be identified as the fall-back “straight white male”, and he was the oddest of them all! With that, Ms. Simone’s roster of non-archetypal archetypes never seemed a focus group checklist, nor a grand-stand play of over-emphasis, but rather a representative sample of an urban population. As Star Trek creator Gene Roddenberry wished his Enterprise crew to be a blend of gender, race, and nationality that reflected “Starship Earth”, our heroines and heroes in The Movement not only broke barriers, but obliterated them, and simply by being themselves! 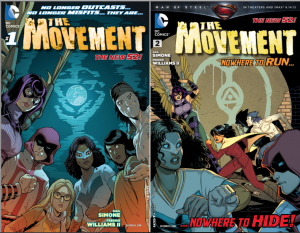 All that said, this was not a sociology treatise, but a comic whose stories were filled with mystery, action, and genuine emotion, and all with a great sense of humour, and through Ms. Simone’s skill we were able to witness these characters exhibit real growth, and develop a camaraderie reminiscent of the familial nature inherent in the best Justice Society stories. Most importantly, although they lived in a “dark place”, the stories didn’t, as even if they sometimes disagreed on the method, the members of “The Movement” could be counted on to act in a manner that would create the most good for the most people, often casting a bright light that illuminated the problems facing those under their protection. 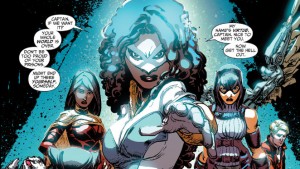 Beyond the ham-fisted initial marketing that positioned this book as a political screed, The Movement, with its virtually unknown leads and challenging, stand-alone story-line stood little chance of succeeding in the current Big Two line-up of cosmic “events” with their in-numerable cross-overs and tie-ins that so dominate the sales charts and restrict reader’s pull lists, and particularly DC’s penchant for dark themes and even darker heroes. As does Ms. Simone, I applaud the company’s trust in her creation, as well as their willingness to let her shepherd the tale to a natural ending point, and can only hope in the future that they were not so off-put by the sales of this important book that they will find a place in the DC main-stream line-up for something other than the sturm und drang of the usual fare again in the future. 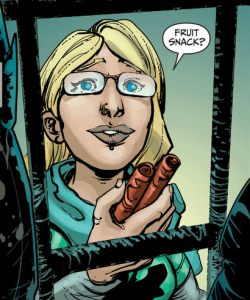 For we in the audience craving a more balanced and diverse landscape in comics, not that we should support sub-standard titles blindly, but when a high-quality book that is as forward-thinking as The Movement comes out, we need to throw our weight behind it, perhaps by buying one less variant cover of a book that we’ve already bought. With the focus at The Big Two being on umpteen titles featuring Batman, Avengers, X-Men and Justice League (and their various iterations, cohorts and proteges), new, smaller titles will struggle to compete for our reading dollars as those dollars become so concentrated on the monlithic power of the inter-connected “families” of books. This is not a knock on those loving those titles (or the titles themselves), nor the events that surround them, and while allowing for the greater diversity in indie books, those of us wanting a bit more variety out of mainstream super-heroics need to take a pro-active role toward making successes of those titles that speak to our concerns in a meaningful way.

If you loved Ms. Marvel, Black Widow or She-Hulk, share that passion with someone not reading them, or better yet, share the digital codes! I joke about it, but over the last few months I’ve seen some titles I love fall to the wayside due to poor sales; despite what seemed to be avid fan bases for titles like Fearless Defenders and Red She-Hulk (Journey into Mystery, also!), the sales figures didn’t reflect that passion. While things are getting better, they will only continue to improve by we in the audience being aware of the market forces at work and keeping vigilant to the trends.

I’ll leave the last words to Ms. Gail Simone from her “Ape in a Cape” blog, where she finished with the following:

I have a bunch of people to thank. First, everyone at DC, but Dan Didio especially. Dan championed this book and it wouldn’t have happened without him. He said it was time we had a book like this, and he believed in us and was a cheerleader for the book all along. Jim Lee also had kind things to say, and that means a lot.

Second, I have to thank the people who inspired some of the characters…Jay Justice was a big inspiration for Virtue, I saw her cosplay Batgirl and I just wanted to WRITE that so badly that I made a character so I kinda could. Also, thanks to Jill Pantozzi and Al Davison for help with Vengeance Moth, so that her being in a wheelchair wasn’t simply a surface detail, but MOSTLY to the great B.A., who was my biggest inspiration and supporter on this character and who looks exactly like VM and makes me smile all the time.

I have to save the corniest, but truest thank you for the audience. I know this book wasn’t for everyone, but a lot of you stuck with us and tried to spread the good word and you made every issue worthwhile. Because of you guys, it was worth all the hard work. Thank you so much for the reviews, fanart, fanfic, cosplay, and lovely comments. They warmed our hearts over and over again.

This is the end of this book, hopefully it won’t be the end for the characters…several of them have been popular with readers and creators, and maybe we will see them again. 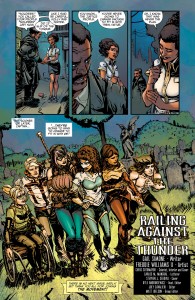