FacebookTwitterPinterest
Who is the mysterious new leader of the Flaxan Army? Yesterday I brought us up to speed on the current events for Invincible and why we're so excited for issue #100. Finally, after being pushed back a week, we get to see the big reveal for the new Flaxan threat! 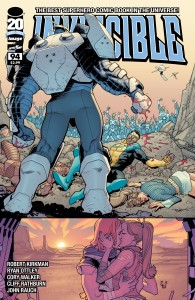 Who is the mysterious new leader of the Flaxan Army?

Yesterday I brought us up to speed on the current events for Invincible and why we’re so excited for issue #100. Finally, after being pushed back a week, we get to see the big reveal for the new Flaxan threat!

Ever since Monster Girl and Robot returned from the Flaxan dimension something has been off between the two of them. This issue finally pushes the conflict to the surface as we learn both who the new enemy is and the cause for their discourse. Robert Kirkman does a spectacular job once again of leading us down a path of intense personal conflicts and then exploding them into the foreground with extreme ramficiations. Could this be the crisis that leads us into the “The Death of…” story arc? We’re still 6 issues away, so there could be another threat to come but the Flaxan Army is a very real possibility considering their devestating recent attack.

I love that Ryan Ottley, the all-star artist behind nearly 90 issues of Invincible, and Cory Walker, the first artist to be attached to the title, are working together on this project. It’s fabulous to see Walker’s work, after all this time since issue #7, side-by-side with Ottley’s. The pairing seems very appropriate considering that Walker’s art is used to accent the flashback moments for Monster Girl and Robot in the Flaxan dimension and Ottley’s art reflects the present. John Rauch brings his game to a whole new level coloring both styles. He brings an energy to the pages that matches the soft nostagia of the flashbacks and the war-torn scenes of the present.

Reading through the huge battle scenes felt like something out Marvel’s The Avengers. We got to see a huge cast of characters put on a show defending a city against an alien threat and being awesome. It’s that sort of epic action story I expect out of Invincible and what keeps me coming back. I’ve heard some chatter about how Invincible should match up with it’s twin and get a TV show but honestly I am a huge supporter of it getting a movie series. I can totally see an Avenger-esque charge to the battle scenes matched with the huge personal struggles woven into the story to make something completely plausible. 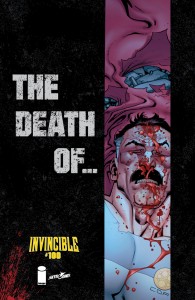 Buy it, Invicinble is only going to get more amazing from here as the count down continues to 100. Image/Skybound continues to promote, “The Death of…” mystery arc with their line of graphics teasing the death of one of our beloved characters. The antipcation only intensifies as we see the stakes get higher and higher each issues.