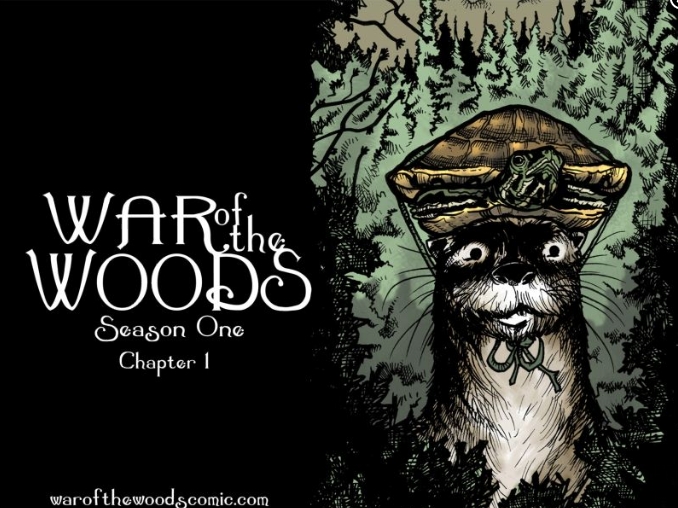 War of the Woods: Season 1

A few weeks ago on the podcast that we do here at Talking Comics my cohorts and I had a friendly debate over the merits of digital vs. print in the comic book medium. For many practical reasons, I don’t have space for a collection and the justification of my iPad purchase, I believe digital is the way to go now and in the future. The potential positive influence on the independent comic community never even came to mind. That was until I tapped “download” on War of the Woods season one. I went in cold, only reading the scant description that comes along with any ComiXology bought comic, and came out with the most sound argument for digital distribution yet. Because to me Matthew Petz’s Wind in the Willows meets War of the Worlds tale could only exist in the wide open environment the internet provides. It’s a sound and singular vision brought to life without big publisher filtration and although it’s not perfect it deserves your close attention.

The story is simple. An alien force is invading Earth but instead of seeing this horrific event through the eyes of men we experience them from the perspective of a group of woodland creatures. These assorted otters,turtles,birds,deer and raccoons react in the same ways a human community would. They call meetings, make a survival plan and even show great bravery for the greater good. The real feat is that this never becomes a gimmick. The book never winks at you and never stops to say how funny it is that animals are acting like people. In fact Mr. Petz goes to great care to avoid having them do anything human at all. They don’t have “Otter TV” or “Deer Radio” but what they do have is scavenged bits of electronics that they have learned to use, in emergencies, over the years. I felt this was a deft way at anthromorpising the characters without having it turn to parody. War of the Woods employs a large cast of characters and this first season is mainly focused on an adventure those animals take. I won’t spoil plot details but along the way we meet Mur D’eau a fisher from Canada that is as bad ass as any superhero in a Marvel or DC book.

The unique characterization is a strength of this book but its the art by Mr. Petz that’s the real standout. He has managed to design the animals in such a way that exudes realism while still rendering a distinct sense of style in every panel. He also has created memorable physical differences between creatures of the same species that prevent the reader from ever getting confused during the action.  Last but certainly not least are his depictions of the alien life forms. They are part Xenomorph, part Resistance Chimera and all parts awesome.

The only place where War of the Woods falters for me is in the character to character exchanges. I find a lot of the dialogue to be simplistic and on the nose. Petz has said this story is meant for all ages so this could very well be a stylistic choice but it plays more like a writer working out the kinks. The dialogue problems become glaringly apparent when the story delivers its exposition. Having your protagonists spout story points is difficult for even the most seasoned writers and in War of the Woods it’s the chief element holding it back from being a truly special book.

Complaints aside War of the Woods is a fun read from a fresh voice. The art is fantastic, the characters are fun and except for some dialogue problems it’s a joy to take in from it’s attention grabbing beginning to it’s emotional end. I can’t wait for season 2.

Buy  It- The first issue is free and the next five are 0.99 cents a piece. That means for five bucks you get a wholly original comic book from a very promising creator. This is a no brainer!