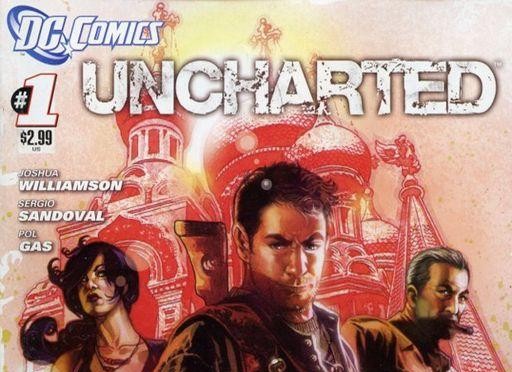 Video games are a great passion of mine. They, perhaps more than comic books, dominate the lion’s share of my geek mind space. I listen to video game podcasts, read video game reviews, and I’m a religious watcher of Giant Bomb’s Quick Looks (which if you don’t know are 45 minute play sessions of recent games by the crew over at http://www.giantbomb.com). Bottom line: I freaking love to have a controller in my hand and I sometimes get angry at my books for tearing me away. But this week I was treated to a wonderful nerd convergence.

Uncharted #1 is the first in a series of comics based on the video game franchise of the same name. If you are unfamiliar with the Uncharted franchise I’ll give you a quick catch up: Nathan Drake is a roguish treasure hunter and descendant of famous explorer Sir Francis Drake who, together with his mentor and friend Victor Sullivan, globe trots to exotic locations in search of valuable and usually supernatural antiquities. Think Indiana Jones in the modern world. The game is heralded for it’s emphasis on characterization and story which in my mind would make it a perfect fit for the world of comic books. Thankfully, after reading this issue I can say that while its not a slam dunk Uncharted #1 is an immensly entertaining read that will please fans of the highly successful Sony video game franchise.

“Crap.”  That is the first word uttered by Nathan Drake as he stands astride the nose of a plane as it sinks into a pit of lava. There in that first syllable of the first line of dialogue is all you need to know to fall in love with our rapscallion adventurer. Drake has always been intensely likable in the game series and writer Joshua Williamson has captured that perfectly within the pages of this first issue. In fact he is more charming and affable because, transplanted out of the the context of a video game, he no longer has to kill every pirate and thug he encounters.  I also quite like the opening action scene that really showcases Nathan’s “this is a bad idea” approach to being a hero.  That being said you can’t have a hero without a side kick and so of course Victor “Sully” Sullivan is along for this latest adventure. Those who aren’t fans of the video games are really in for a treat here. Sully is the perfect complement to Nathan and there friendship is on full display here.

Where the book falters is in it’s storytelling acumen. The plot itself is a lot of fun and has me interested but the manner in which it is delivered can sometimes be obtuse. This takes place in-between the events of Uncharted: Drakes Fortune and Uncharted 2: Among Theives and while that might not seem like a lot of continuity to keep track of it does ask the reader to adjust his knowledge of the character by about 5 years. I found myself initially confused by character introductions and character omissions because my mind was firmly set in the world of the Drake I had just played in Uncharted 3: Drake’s Deception. I’m also concerned with the overuse of the ellipse in the issue. It gives the story a slightly contrived feel as each scene seems to share a line or action that binds them together with the next. I’m a proponent of this style in doses but for it to occur as much of it does lulls me into a rhythm I don’t like to be in for an adventure story. Lastly, and this is a stupid nit pick that should be ignored. It took me a while to get used to Drake’s face. I’m so used to looking at him in the video game that the slightly different look he was sporting threw me off for the first few pages. Stupid, I know but I had to put it out there.

Those are small gripes for a book that on the whole I really enjoyed. It captures the brisk and fun spirit of the video game series while taking advantage of the comic book medium with interesting panel design and dynamic action. If you are a fan of the video game or adventure stories you should certainly seek this out.

Knowledge of the characters will help with your immediate connection to them but as far as the plot goes I think you can go in cold and be okay.

Buy It – The storytelling is brisk and fun, the plot develops at a nice pace and I’m jazzed about the proposed maguffin of traveling to the center of the Earth.