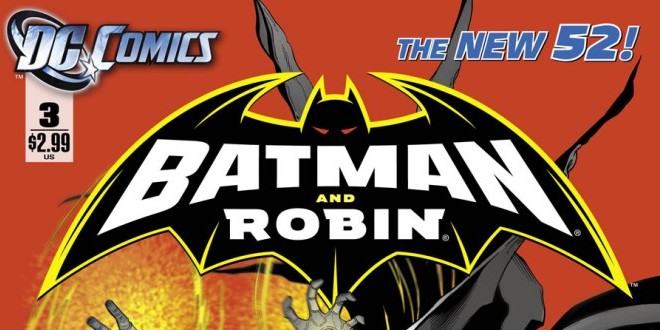 Coming off of last month’s complete 180 (at least for me) in both content and tone, I am pleased to report that Batman & Robin 3 is a fine extension of the quality presented last issue. There is significantly less Batman and more Robin in this entry (a reversal of last month), and I was quite pleased with the result. Damian as Robin is a little bastard, to be sure, but we are more aware of the demons that plague him and the reasons why he is the way he is.

I buy his struggle with Bruce “coddling” him, and his inevitable rebellion against the house arrest he has placed him under. It makes sense, and the action that follows is creepily effective. The villain that Batman has been trying to shroud Damian from is eager to reveal himself, and seems to want to make an ally out of the new Boy Wonder. The scary thing is that, while he never says it, you know Damian is considering it. Much ass is kicked, and Bruce’s anger that rears its head is kind of chilling.

I’m not exactly sure where Tomasi and crew are leading us, but as long as the great character moments keep coming (Alfred has the best line in the book), I’ll be there waiting.