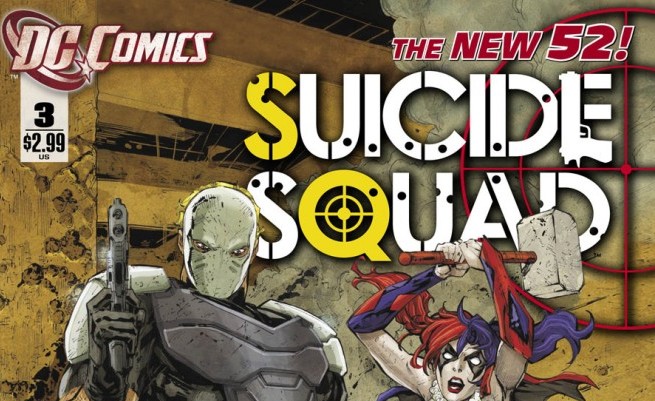 While this book may not have the same whimsy or good humor that its predecessor had (and I promise, from here on in I will stop making that comparison), I am fairly confident that it is the most action-packed of all the New 52 I’ve read.

It’s apparent that Deadshot is our leader here, and we get a lot of him this issue sans mask (which, oddly, is off-putting). The story continues from last month, with the rescued baby being at the forefront of importance and the Squad trying to make their rendezvous with the extraction team to get their Escape From New York-style implanted bombs defused before they all go boom. The story is set up in a framing device that kickstarts us with a ton of action and then shows us the events leading up to the current standoff. There’s some sexy Harley Quinn action, some great moments with Diablo and a guest appearance by Mad Dog which alludes to a history with Deadshot (that may or may not be something that has been previously established — I don’t know the character that well).

What I loved most, though, was the reveal at the end. I won’t say who shows up, but I can tell you that it’s an old-school Squad character (okay, okay, THAT is the last time) who is definitely going to throw a monkey wrench into the dynamic of the crew. It’s a great cliffhanger, and I’m quite excited for next month.

Buy it – the action alone is worth the price of admission.