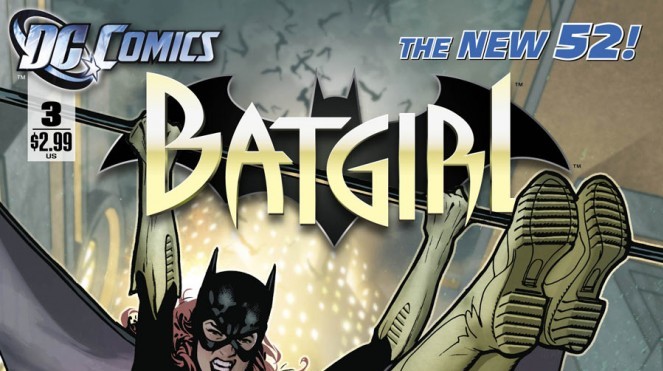 As the cover indicates, we are treated to another Batman sidekick in this issue of Batgirl, the one and only Nightwing. Dick Grayson, one of my favorite characters in the DC Universe, shows up in this third issue. Gail Simone, who at this point is nothing short of a master storyteller, weaves a wonderful character tale. What’s more impressive, however, is that she does it in the midst of the tightly-wound Mirror story arc.

The themes that have been prominent for the first two issues are still very much here — fragility, responsibility. Barbara’s inner monologue handles this very well, and we’re even treated to some “what if” moments as she tries to work out some of her issues with her father. But the cornerstone of this issue is her relationship with Dick.

I love that Barbara recounts the time when she and Dick’s younger selves, under the tutelage of Batman, used to chase after one another (literally) as part of their flirtation. It begs of a simpler time that is all but gone due to, well, getting older. There’s a kindness in Dick that her father and Bruce can’t show, and it really helps understand more about her and her situation.

My only gripe with this third issue is that Barbara’s roommate was devoid from its pages. She’s one of the highlights of the book, and even if it’s only for a few panels, it helps lighten things up.

Buy it – You do need to have picked up the previous issues to know what’s going on, but this is as good as the New 52 gets.