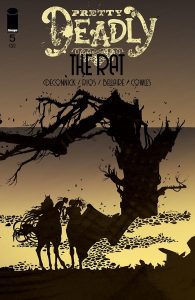 So as not to bury the lede, Pretty Deadly: The Rat #5 might just be my favorite issue of a series that I consider to be one of the most unique works that I have ever read. From the beginning of the first arc, Pretty Deadly pushed the boundaries of the comics medium, as the combined talents of Kelly Sue DeConnick, Emma Rios, Jordie Bellaire, and Clayton Cowles wove a long-form, decades-spanning, and  surrealistic tale encompassing many story-telling styles and genres, yet one still beholden to a singular and humanistic core.

Set in the Hollywood of the late 1920s/early 1930s, the story-line of Pretty Deadly: The Rat begins with the heart-breaking reveal of the death of Clara Fields, whom we first met as a little girl back in Volume 1: The Shrike. Her Uncle Frank (aka The Conjoure-Man) discovers that her work in the film industry led her to some dark people and places, of both the real and metaphysical varieties. His efforts at a standstill, he reaches out across the spheres to Deathface Ginny, who is Death’s daughter and The Reaper of Vengeance, for help to find the truth, and there-in lies the tale. 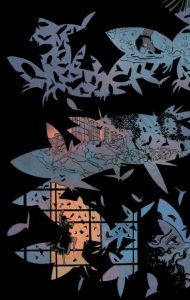 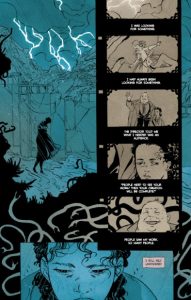 In this issue, that tale is told by Clara herself, as she relates the journey that would find her courting The Reaper of Obsession, a path that would bring her to take her own life, although she had some hope that action might lead her to a better place, the mystic realm of The Garden. This from Clara: “I am a story in search of an ending. I thought that it was something I had to go find, but running toward it only chased it away. Then I thought if I was still, and if I was quiet…when I was ready…my ending would come to me.”

In the world of Pretty Deadly, death is not always final…nor kind, so Clara has one last obstacle to overcome before she can rest, and that…well, that would be telling, wouldn’t it?

What I can say without spoiling a wonderful read is that Ms. DeConnick has delivered powerful messages on the awful cost of obsession and the redemptive power of forgiveness, and in concert with the stunning art of Ms. Rios (ably abetted by Ms. Bellaire and Mr. Cowles, of course), those messages ring loud and true from the page to your heart. Pretty Deadly: The Rat #5 provides the perfect ending to this arc…although as one of our other narrators, Bones Bunny, opines “That’s the trouble with happy endings, isn’t it? They’re more like beginnings.”

VERDICT: 10 out of 10–A MUST BUY (and perhaps even a second copy that you can lay one next to the other so as to enhance the effect of Emma Rios’ and Jordie Bellaire’s multi-page spreads!)

As this unique series reaches its midpoint, the creative team has reached a new height in their artistry, crafting epic myth-making with a lyrical, terrible beauty that sharply illuminates the human condition. I truly believe that in the years to come, Pretty Deadly will be held up as a singular achievement in the comics medium of this era. The trade collection for this arc will be available in March, so do yourself a favor and pick up the first two volumes as well and immerse yourself in a story-cycle that will never leave your heart and mind.

#1) Thanks to the folks at Make Stuff and Kelly Sue DeConnick, there’s a trailer for Pretty Deadly: The Rat that you can watch here:

#2) Back on 27 August of 2013, we spoke to Ms. DeConnick and Ms. Rios about the coming launch of Pretty Deadly, and you can listen right here!