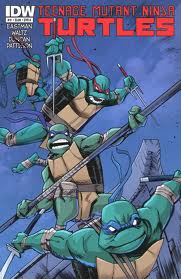 Familiar characters make their appearance and showdowns are about to begin in this new issue. Last issue, our heroes in half shell had just arrived at April’s father’s antique shop to rest and recuperate from their previous battles and their search for their father Master Splinter.  Unbeknownst to the mutant teens they were being watched by a mysterious young woman.  Meanwhile, after dealing with being kidnapped twice-first by Stockman’s mousers and his henchman Hob and then the Foot Clan-Master Splinter has been reunited with his enemy of his past life: Oroku Sakai also known as The Shredder (or Tin Face, Metal Mouth, etc… to his detractors)!

At the beginning of this issue, Splinter has defeated Karai’s pitiful attempt of killing him. He next takes on the foot which is not a tireless effort but he defeats them as well. As a side note, during his fight with the foot ninjas, Splinter reminisces about his past life.  Readers will get an interesting look at the man behind the rat. It details more of what took place in Splinter’s past life, when he was Hamato Yoshi. It’s an excellent read and you’ll definitely want to check it out!

Back at the antique shop, Raph, Leo, and Don are discussing what their next move should be while wondering where Mickey is with the dinner as that mysterious woman peeks through a window.  On the rooftop across the street, Mickey with dinner in hand (pizza of course!) sees her below and gets the jump on her and then her friends get the jump on him.  Hearing the commotion, the rest of the green fab four come to help their brother out. Before a major brawl can break out, Casey intervenes and the big misunderstanding is sorted out.  Turns out our mysterious lady is, well you’ll have to read the issue to find out.

Returning to  Splinter’s predicament, before he can take on Shredder, Splinter has defeat the only person standing in his way: Alopex the fox.  During this battle Splinter tells her that she can choose to follow of different path than the one she’s on. Does she listen? Of course not and as a result she has her butt soundly kicked by the sensei.  This finally leads to the showdown that fans have been looking forward to but must wait till the next issue to see:  Master Splinter vs. The Shredder.

This was an excellent read, the series has come into its own with its unique mixture of old and new. Eastman and Waltz working together make for brilliant story telling.  The art is great especially the action sequences.  I’m definitely enjoying this series and I look forward to happens next. You should definitely pick up a copy of this issue.