“I suppose they want us to become brothers-in-arms or something.” 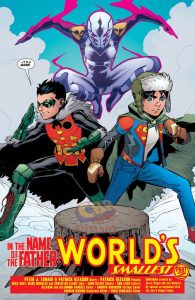 Jon Kent (Superboy) and Damian Wayne (Robin) previously wrecked Batman’s genetics lab in a juvenile tussle.  Now, their super-hero fathers put them through a series of tests to prove that they deserve their places as up-and-coming heroes.  The two have to overcome the elements, beasts and even each other in order to prove that they deserve to fight alongside their fathers.

The writing team of Peter J. Tomasi and Patrick Gleason (Batman and Robin) continue their strong command of beloved characters in Superman #11.  Jon is ever the do-gooder, and Damian the constant brat.  The strength of this issue is that it’s fun.  It feels like an animated tv series, put to the page.  Though there are moments where it seems like the comic loses itself to mindless action, the beginning and end of the issue tie a bow around the chaos.  This series has never been short on humor, and it’s pretty natural here.  Tomasi and Gleason have even made Batman a humorous guy, as he demonstrates with the designing with part of Jon and Damian’s test.

Gleason’s pencilling is whimsical; it feels like he’s enjoying the work on every page.  It’s not very common to read a comic with Batman and Damian that are outright joyous.  In that way, Superman #11 is something of a welcomed anomaly.  The coloring by John Kalisz (Constantine, Detective Comics) is affecting, but also diverse in its scope.  Jon and Damian’s costumes pop from the page, but violet and burnt orange sunset hues are particularly gorgeous about halfway through the issue.  The artwork is not just masterful, but it’s also friendly to novice and seasoned readers alike.

Pretty Good.  This isn’t the best issue of the series, but it’s worth picking up if you’re this deep into Superman.  The chaos that consumes most of this story sometimes distracts from the chaos’s original purpose.  However, the tongue-in-cheek writing serves as a wink to the readers; Tomasi and Gleason know that this isn’t the most serious superhero story.  Unsurprisingly, the artwork continues to be superb all the way around.  The ending lets us know that this probably isn’t the last time that Jon and Damian will interact.  Much like their fathers’ relationship, it’ll be rife with noble intentions and the occasional confrontation.