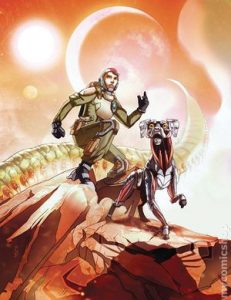 There are 200 people in this mining colony on the planet Kirawan. Kyle, being the only kid, is doing what any kid his age would do and tries to be an adult. Cohen endears him to the readers and all of Kyle’s actions feel like what a kid his age would do; this is especially shown in his relationship with his dog Q, which is a great relationship that I can’t wait to see get further developed. This characterisation balances out the clear spotlighting of the main plotlines and characters that at some points feel too candid.

The art by Atkins and company is very expressive and the character designs, especially for the natives of the planet, are great -they look like the offspring of predator and the Mangalore (bad guy aliens) from fifth element.

When I read the credits and saw that there was a motion video of this comic, I looked it up and it was an advertisement for this comic which outlined this first issue. My problem with it was that it gave away the resolution to the cliff hanger -it was obvious, but still …don’t give away the cliff hanger! This does not take away from this being a solid first issue.

Check it out.  This issue is good, but not to the extent I feel you need to buy this issue. Cohen uses sci-fi clichés, but the character of Kyle is well serviced and is developed enough to make you to care about Kyle  and the clichés do not become too glaring a problem.  It’s a six-issue miniseries, so I will definitely be back for the next issue, if only to see what other machinations the art team come up with.