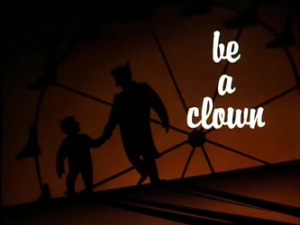 Synopsis: [From Wikipedia, see link: Here] Mayor Hamilton Hill’s miserable son, Jordan, becomes even sadder when his father uses his birthday party as a political gathering, and ends up stowing away in the truck of the party clown hired by Hill for the party, whom he doesn’t know is actually the Joker in disguise. It is now up to Batman, whom Mayor Hill distrusts, to rescue the boy before it is too late.

Despite the fanfare associated with Mark Hamill’s vocal performance as the Joker, it is fair to say that after Christmas with the Joker and The Last Laugh, the initial Joker-centric episodes of Batman: The Animated Series, have left more to be desired. Of course, this has nothing to do with Hamill’s performance, but more to do with the material on show. Luckily with Be A Clown, Hamill not only delivers one of his best performances as the Joker, but viewers also finally get a episode worthy of the character. 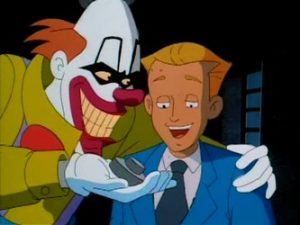 The Joker in disguise as ‘Jekko the clown’ and Jordan, Mayor Hill’s son

The plot is fairly simplistic. After a fallout with his father at his birthday party, Mayor Hamilton Hill’s son, Jordan, runs away with a clown/magician named Jekko. The only problem is, Jekko is actually the Joker in disguise, leading Batman to try and find him before, well, the inevitable happens.

Despite the somewhat mechanical plot, which slightly borrows aspects from the Joker’s first appearance in Batman #1 (which would go on to be remade in Ed Brubaker and Doug Mahnke’s Batman: The Man who Laughs), there is much more to Be A Clown than first appears. Not only is the episode brought to life by Hamill’s Joker, but there are some decent set pieces and an menacing, atmospheric palette and subtext, all of which add flavour to a story that could have been described as cliched.

Although the story’s main emotional arc is perhaps more accurately linked to Mayor Hill and his sons dysfunctional relationship, it is the Joker, appearing as an dangerous and manipulative role model that really accelerates this story. There’s no doubt that with the Joker’s accidental abduction of Jordan, as well as their later magician master/apprentice relationship, there is some darkly subtle subtext in place. Here, we see a battle of father figures and role models; of flawed but loving fathers (as in Mayor Hill) and how that compares with active, but ultimately evil role models like the Joker. By contrast, Batman stands in the middle between the two figures of Hill and the Joker – appearing as a responsible and active role-model who returns order and equilibrium to the tale.

Furthermore, we are also used to seeing The Joker face off against adults. Although the comics have seen the Joker do some remarkably nasty things (some of them frankly, unpleasant), it’s very rare within other Batman media that we see the Joker come into contact with children. With this, a degree of menace and tension is added to every scene as we begin to fear for Jordan’s safety. Although darker than the previously camp forays in Christmas with the Joker and The Last laugh, the episode doesn’t go too far down this scale (after all, this is still a cartoon for kids) and is never in any way distasteful – something the writers must be praised for. 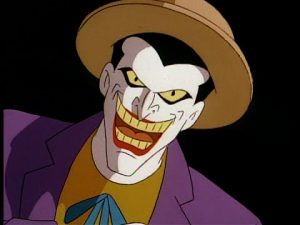 The strongest element within this episode is Hamill’s performance as The Joker. Whereas in previous episodes, where the Joker has been fairly ‘one note’, here Hamill finally gets to show a varying degree of range in his performance. Hamill appears able to effortlessly flick between manic, gibbering jester to menacing, monstrous psychotic. It’s an brilliant performance, with Hamill appearing to have studied almost every line from the script, delivering them with an accuracy that never once seems off. Not only that, the Joker is also provided with genuinely funny material, delivering great lines such as: “They don’t make Straitjackets like they used to…I should know.” The same can’t be said for Conroy’s Batman, who despite his typically brooding performance, is given some absolute clangers in terms of dialogue (the “Bat-Magic” one-liner in particular sticks out).

Although this column has taken a few swipes at AKOM Production for their animation in the past, it must be said that there is a marked increase in their quality here. While it is not a complete home run (some of the characters again appear ‘off-model’ at times) there is some beautiful background work on display here.

This is particularly clear in the final third of the episode, when Batman attempts to save Jordan from the abandoned amusement park that functions as the Joker’s hideout. Complete with its own demonic house of horrors, the setting is rendered in dark,  airbrushed greys and blacks, providing a series of beautifully sullen images that create the almost perfect hideout for a twisted character such as the Joker. Fun Fact: Tim Curry also has an unspecified cameo as the mechanical clown that Jordan meets when on the run from the Joker. The laugh this robot emits was the laugh that Curry would have used as the Joker on the show. 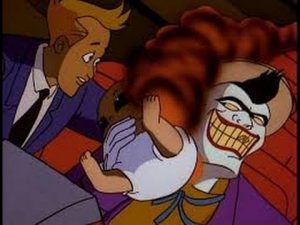 The Joker’s explosive ‘Doll grenades’ in the final set piece are reminiscent of Frank Miller’s The Dark Knight Returns.

The setting of the Amusement Park also provides for some excellent and inventive set pieces within the episode, something that is perhaps due to Bruce Timm’s own influence in taking over story-boarding duties for the last half of this episode.

Perhaps the most memorable moment within this episode is the final battle between Batman and the Joker on the roller coaster. This is not only due to the Dark Knight Returns references (with the Joker’s exploding dolls) but also because of the high stakes involved, as Batman races to save Jordan on a runaway, dilapidated roller-coaster, all the while locking horns with the clown prince of crime. This sequence was later be replicated in a later video game for the Super Nintendo – The Adventures of Batman and Robin (1995).

Other neat little instances include the Joker’s throwing star Playing cards (I always loved these as a kid) and the Houdini inspired Water Tank trap, which  evokes both the Adam West era of the sixties, but also allows the series to demonstrate Batman’s skills as an escape artist.

To put it simply, Be A Clown is head and shoulders above the other early episodes concerning the Joker. Not only are we finally allowed to see the full breadth of Hamill’s skill as the Joker, we also get a story that despite a somewhat mechanical plot, is imbued with just enough menace and subtext to add spice to the proceedings. Furthermore, gone are the frankly ridiculous tropes of robot clowns and large toys, instead replaced with a much more down to earth story of the role adults play in the lives of children, while at the same time exhilarating the audience with inventive set pieces and beautiful background images. Long may this continue.