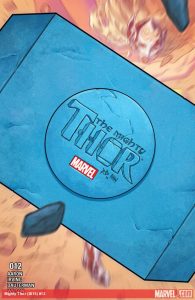 Mjolnir, the magic hammer, has long been an important part of Thor’s character. This has been especially true over the past two years. When the traditional Thor, son of Odin, becomes unable to yield his trusty weapon, Dr. Jane Foster proves herself worthy of using it in his stead, becoming the new Thor. She writes a new chapter for the hammer and it’s prophecy: “Whosoever holds this hammer, if she be worthy, shall possess the power of Thor.”

For the new Thor, the weapon is dangerously double-edged. In battle, she is able to coax abilities and power out of the hammer that Thor Odinson could not. But as it gives new power, Mjolnir also takes away. In her human form, Dr. Jane Foster suffers from a debilitating cancer. And every time she uses Mjolnir it counteracts the effects of her chemotherapy, leaving her body worse for wear each time she transforms.

In the previous issue, Mjolnir revealed new powers, and even a personality of its own. This issue opens with the hammer taking Thor to a library of the Gods, where she finds someone who can tell her the hammer’s origin story. What follows is a tale of Old Asgard, one in which Odin battles powerful forces. Here, writer Jason Aaron’s take on the haughty Odin is a little more light-hearted, a welcome change for the series.

In the thirteen-page flashback, Aaron and artist Frazer Irving tell a story that is simple, yet epic, as Odin and the dwarves of Nidavellir each play their parts in creating Mjolnir. Irving uses unique color effects to create an old-time storybook feel that contrasts well with Russell Dauterman and Matthew Wilson’s present-day Thor. In Irving’s palate, Odin’s battle for his life  stands out in a blue-green negative, showing his actions as reactions to the power of his supernatural foe.

Issue #11 raised a lot of questions about just what Mjolnir is capable of, and why. While this issue fills in some of the history of Mjolnir, it largely leaves those questions to (hopefully) be answered another day. This seems par for the course for Jason Aaron. Two years ago we learned that Thor Odinson was no longer able to pick up the hammer, but we still don’t know why. The “War Between the Realms” has been hinted at even longer, and the hints continue in this issue. Still, it works well as a stand-alone story that fills in a core part of Thor’s mythos.

Verdict: Check it out. If you haven’t been keeping up on Thor, this is a good single-issue about the origins of the magic hammer. Regular readers may be disappointed that there isn’t more, as they add one more small piece to the puzzle of Aaron’s ongoing Thor story.