Cave Carson is facing the loss of his wife and trying to hold himself, his job, and what’s left of his family  together. The weight of this event along with his absence from spelunking with EBX has drained Cave Carson’s demeanor. He’s depressed and his daughter, along with friends and colleagues, are trying to get him out of his funk. This is all slowly building, ultimately dragging, to an action sequence with a sci-fi monster straight from the pulp pages.

For a comic book with a name as assertive and goofy as Cave Carson Has A Cybernetic Eye, it’s a 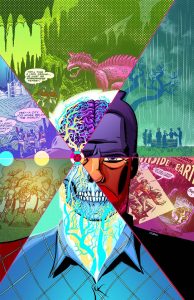 gloomy book tackling the grief of its titular character. The art by Avon Oeming can be an acid trip hallucination stemming from Cave’s cybernetic eye or the moody meditations of Cave at his wife’s funeral  and the loneliness he contends with in his home. The reader’s eye is guided by Cave walking toward the right side of the page and then by the car he drives on his way home. It breaks panel borders and in its striving for sequential art tells an elaborately structured story of a man facing his  first day of being widower. The lack of dialogue by Way and Rivera accentuate the character expressions that Oeming draw by not letting the space be crowded by dialogue balloons.

While the opening is a testament to the initial stage of grief, the rest of the comic lumbers along to really shape the world that Cave has abandoned. His work is hugely important because it ties to his family’s involvement. There’s a video of his daughter training with his wife which shows Carson’s parenting philosophy. The video also shows Carson’s family and fleshes out his daughter Chloe’s back history all while gaining some insight into how the family was prior to his wife’s death.

The third act is a tour of EBX, the organization that Cave worked for, where we see the mark that Cave has left ranging from training to the Mighty Mole MKII (an underground vehicle). Then Cave visits his daughter, after having a hallucination of his dead wife, and they talk about their loss, as well as Cave’s cybernetic eye. Oeming’s art is gorgeous from the cybernetic perspective with vibrant and psychedelic colors that contrast the greys and blues of the rest of the comic.

It’s a slow burn and structurally clunky, especially in the third act which  provides a large part of action and the intrigue of the series. The main focus of the issue is to introduce the world, but it does so at the pace of Cave recovering from his depression and grief then rushing the action. It’s too jarring for a comic that itself could be considered an acquired taste. While the rest of DC’s Young Animal line has made sure to relentlessly pull its readers into their world and provide more than a flagrant premise, this takes its time to brood in the context of its themes.

Wait and See. The issue is an interesting start, but it lacks the grip that other DC’s Young Animal Imprints have generated. It’s a comic that is true to the imprint, but its execution proves to be a good comic in the company of great ones. I’d recommended waiting to see if it paces the  plot a little more evenly and even picking up its second issue to see how it improves. The writing is promising and the art is a gorgeous and  great companion. If it finds its footing with this premise, the comic will surely be another hit for the new imprint.