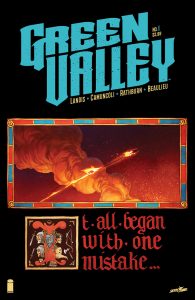 When I was younger, a family friend gave us a bunch of video tapes, one of them was ‘A Knights Tale’, a film about a knight’s squire (played by Heath Ledger) pretending to be a knight to win glory and fame. I watched this film probably way too much – it’s not a masterpiece and it follows quite a few tropes, but I just loved the lightness in the film paired with the grandeur of the knights and the medieval era. Landis’ Green Valley reminds me much of this film as the comic does not reinvent the wheel, but instead injects it with so much character, that the clichés can be overlooked.

We open on two of the knights (Ralphus and Bertwald) joking about and they continue to joke even in battle, yet Landis doesn’t make it feel awkward. The characters in the first two thirds of the comic are filled with so much charisma and wit, that you can’t wait to see what adventures these four will get up to and the inevitable jokes and action that will unfold. The last third gives us some good old bombastic action with swords and, if the last page is anything to go by, we will have an interesting fight on our hands at the start of the second issue.

Camuncoli’s art fits the story well, as its cartoonish quality helps the Arthurian feel of a knights’ quests and a mythic land. What really elevates it though is Beaulieu’s colours, which bring a vibrancy to the tale, as well as fitting whatever tone Landis desires.

The story itself is quite sparse and has moments that we have seen in many other books (despite Landis’ claim in the back that this story hadn’t been told yet), which means that some people might feel at a glance that they’ve been there, done that. However, it is clear that Landis is concentrating certainly in this issue and in his other works (Superman: American Alien) on character and this comic has it in spades.

Give it a shot.  There’s charismatic knights, witty lines and what promises to be a nude fight scene – it makes sense in context, I promise. I mean if that last thing doesn’t get you interested I don’t know what will, apart from Camuncoli’s art which may be worth paying $2.99  for on its own.