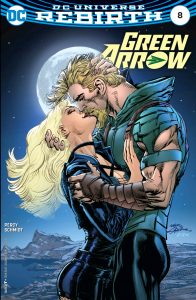 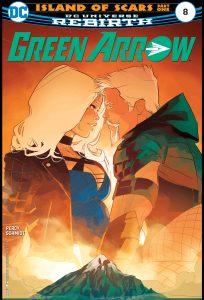 Oh my! Just look at these covers!

One of the biggest complaints about the New 52 was how our old staple relationships (Clark/Louis, Barry/Iris, Ollie/Dinah) were erased overnight. It left most readers a feeling of longing for a lost love. We got small dose back with the introduction of pre-Flashpoint Superman, but overall, it just wasn’t the same. Let’s be honest, while comic readers do want progressive material and diverse characters, we also like our old staples to be there for us to lean on. Well, if anyone has heard that criticism and taken it to heart, it was most assuredly Benjamin P 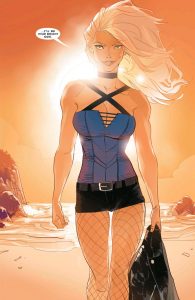 This best thing to be said about this issue are quotes from the author’s twitter; “THE SEXIEST COMIC IN WORLD HISTORY” and “Hubba, hubba.” The majority of our time is  spent developing the relationship  between Ollie and Dinah, not just emotionally, but physically as well with an  impromptu  bathing scene that leaves  little to the imagination. However, the  sexuality between these characters is a scene we are used to by now. What we haven’t been treated much to  is the playful banter these two can enjoy which will easily bring a cheesy smile to your face.

While the building of these characters relationship is vastly enjoyable, the mentioning of her past strikes a strange chord. Previous issues have already explained some of her past tribulations, as Dinahh as not wasted an opportunity to rub Ollie’s face in his spoiled upbringing. It’s understandable that this serves as one the biggest points of potential conflict in their relationship, but Black Canary as a superhero and Dinah as a woman deserve to be known for more than just an attractive body and a bad upbringing. Hopefully, as Percy develops these characters, he can add a bit 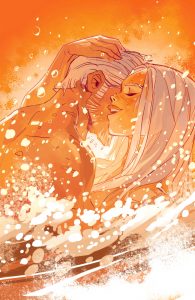 more dimension to her, akin to what we have seen throughout the Rebirth universe.

Spending this much time on character development, unfortunately, left us with little plot. Diggle and Ollie, separately fight the same opponent, which leads itself to the first appearance of our new villain and the revelation that our heroes are not alone on the island. With no emerging details of this new threat though, except a grizzly face reminiscent of past Inferno members, you’re left wondering what Percy has in store for our protagonists.

Back to the covers and beautiful art! It’s so nice to have Schmidt back on this book! Last featured in issue #2, Schmidt’s style is glorious to behold and his highlight-worthy splash pages bring as much sexy as needed for Percy’s writing. Faces are gorgeous, with expressions that tell the story themselves. Being on colors too blends perfectly, reminding one of Manapul’s ability to pull both duties and churn out nothing but quality. Unfortunately, it seems that Schmidt is off the book again till issue #12. Ferreryra takes over the rest of this and has a tough act to follow, but as shown in his previous issues, he has the chops to keep up.

Check it out. While being short in plot, the development between Ollie and Dinah makes this a book worth jumping in on. Besides, how many chances will you get to purchase a book labelled as “the sexiest comic in world history?”

Follow
Currently serving in the World’s Greatest Navy, Miguel, a recovering World of Warcraft addict, is currently working towards his B.A. in English while stationed in Washington, D.C. While not defending America from the ever persistent Atlantean threat, he…