There was a classified U.S. Air Force mission called Janus that went wrong causing  a shipwreck from another planet. Dr. Jonathan Shipwright is the only survivor of the mission and has been outcasted to another world where he’s on a mission to find the saboteur. He wakes up on the side of the road after a dream of being submerged in water. He follows a flock of crows to an abandoned diner in town where he encounters an “Inspector.” 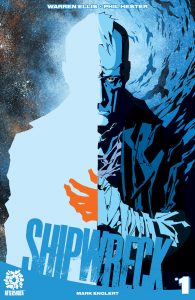 The Inspector in the diner serves as exposition, letting the reader in on the plot, and encouraging our silent lead Shipwright to talk. In the conversation, the characters are submerged in a dream-like environment where  Englert’s colors bleed over their conversation. The reader is subjected to the environment that Shipwright must wander, evident in the opening POV paneling drawn by Hester.

“An augur divined the future from the flight and song of birds.” The inspector states Shipwright’s thematic quality within the world and informs the purpose of the crows. An augur can also be a good omen or bad omen. The spiders symbolize the malicious events that will follow, while the crows are leading him forward through the  mystery. The convergence of these two symbols and the green and yellow hues silhouetting Shipwright and the Inspector punctuate the importance of finding the saboteur of the JANUS mission.

“Nothing’s been the same. I’m always cold. I’m just walking aimlessly. I feel like there’s only half of me left.” The inking by Gapstur illustrates this by totally blacking out half of the character. The comic broods with an emptiness that is profoundly felt from the opening, with Shipwright walking on his own, to the diner only having one character with no one serving their table or at the counter. The lack of literal humanity in the world permeates to what’s hiding in the kitchen of the diner. 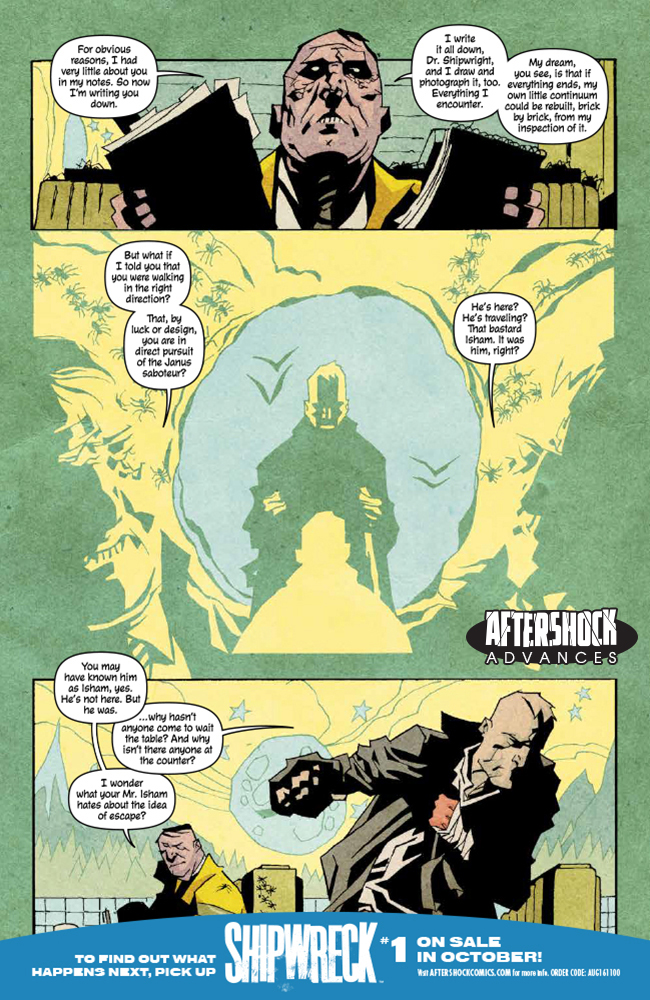 The next scene is crazed, Shipwright enters using an “apporter mesh” which evaporates his body sneaking him through  the crack of the door. This sci-fi aspect adds another example of how humanity has to take a step back in order to navigate this world. The coloring is heavy with blues and whites creating a cold environment, until it’s revealed that the chef was dismembered and had his body parts cooked by his girlfriend. This scene demonstrates a gruesome secret, one that Shipwright must contend with in order to find the person responsible for the sabotaged mission and his current situation.

The team together let each other shine in their respective places. Ellis has no problem allowing the art, coloring, and inking to create the mood his story is intending. Hester, Gapstur, and Englert stylize the conversation to engage the reader in slower moving panels and adequately understand the plot. Hester and Gapstur even immerse the panels in coloring and setting of each scene reflecting how trapped the characters feel or are. It’s a claustrophobic experience that must be escaped and to accomplish this Shipwright (and the reader) must follow the birds.

BUY! It’s a moody book with a mystery felt throughout the issue. Its tactical immersion is sure to have you feeling lost and wondering where you are and what you are doing. And just when you’re getting answers, you find yourself subjected to the world that this team is building. The only comfort you have are the birds that fly over Shipwright and a sci-fi story presented as magical realism, concerning its visceral engagement more than its own mystery.