Cyborg has always been a tricky character. When you look at him and analyze his makeup and skill strengths, he feels like DC’s version of Iron Man. However, he has played much more like The Hulk. He is a great member and integral piece of the larger team dynamic. Unfortunately, Cyborg, much like the Hulk (at least the cinematic version), has been unable to find a solid foothold as an individual character. In Cyborg: Rebirth #1, John Semper Jr. attempts to turn the tide for this character.  There is a lot of potential that will be 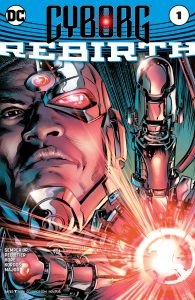 explored on a more individual level.

Speaking of Semper, he is an intriguing choice to take the helm of this book. While he has a wealth of writing experience, it hasn’t been in the comics industry. He is much more known for his work in animation, including Spider-Man: The Animated Series and Static Shock which are two that comic fans will surely remember.

Semper has discussed coming into writing this book that he had a particular concept that he wanted to explore with this character. There’s going to be the exploration from Victor regarding if the human part of him is eroded, and if he is truly now more machine than he is human. But Victor is also very young, at 21 years of age, and we are going to have the opportunity to see Semper take him on a journey as a young black man growing up in Detroit and the challenges that presents.

In this issue, we have an unidentified (until the end of the issue) narrator that has created a technological monster that Cyborg must defeat. Cyborg is being weighed and measured throughout the issue, as the narrator is trying to learn everything he can about him. This serves as a clever device to quickly walk us through his origin story. As is the issue with many of the initial Rebirth books, readers that already know this origin get another retelling of it without diving deep into new territory. For new readers, it’s the perfect mechanism to understanding the core of this character.

Despite the origin retell, this book does move this story along to a point where we clearly understand the emotional place that Victor is in, and also the main threat that he is going to have to deal with moving forward. The strength of this issue was in the writing, but that is no insult on the art. It’s crisp, clean, and very fun to look at. The colors also pop off of the page.

Buy!! It’s been hard to judge what a book is going to completely look like solely on the Rebirth issue. However, this was an excellent first issue. Knowing that Semper is relatively new to the comic space, there could be some growing pains. This has the feel of a book that even if that does happen, readers should be patient. Though, judging by this issue it doesn’t feel like there will be a lot of growing pains. Semper has a plan and I look forward to seeing the growth of Victor Stone as a character.