FacebookTwitterPinterest
Star Trek: Mission New York
A re-cap by Bob Reyer
As September 8th of this year marks the 50th anniversary of the premiere of Star Trek on the NBC network, it was only fitting that 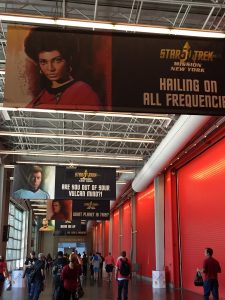 ReedPop (who does such a fine job with the NYCC), Paramount, and CBS would team up to put on an extravaganza celebrating that momentous occasion.  With a sensational line-up of media guests spanning the Trek timeline, interesting panel discussions on topics ranging from science-fiction to hard science as well as the socio-political, there was plenty to engage the mind, whilst still retaining a grand sense of fun and adventure…y’know, as I type those words, that’s the perfect description of what Star Trek is like when it’s at its best. (To quote a certain renowned Vulcan scientist “Fascinating…”.) (I just realized that I closed that last sentence with 6 straight punctuation marks–7 if you count the start of this sentence; surely a record?)
To set the stage, I was fortunate enough to attend the festivities on Saturday and Sunday in the esteemed company of our frequent podcast guest Professor Carolyn Cocca and long-time TC-er Melissa Megan, and pardon me for being personal, but for your Obedient Servant, it was their presence that put this week-end into Warp Drive!  (By the way,  Melissa, Carolyn, and I chat about our convention experience at some length on our re-cap-available now on Meganerd Media , and soon here at Talking Comics, too!)
“Get to the good stuff!” I can hear you muttering (plus some other things, too, so please–watch your language!), so let’s get to it, shall we? Star Trek: Mission New York,  excepting the various panel rooms, took up what those of you who have been to the New York Comic Con would remember as “Artists’ Alley”,  and although it was more loosely-packed with exhibitors than that show, the vendors were of high quality, what with three gaming companies as well as numerous toy dealers, book sellers and publishers, plus comics company IDW, holder of the Star Trek licence, at whose table I had the opportunity to meet the legendary John Byrne! ( I thought that I completely geeked out in his presence, but I’ve been assured otherwise!)
The crowd was constant but fairly moderate in that hall, but the same could not be said about the auditoriums, as they were jam-packed! This was a show where the attendees were focused on the panels, as each one that I went to was basically “sold out”, with every seat filled, some hours in advance, a problem that NYCC will have to address–more on this later! It was grand to see all iterations of Star Trek represented through cos-play, and it was particularly gratifying observing how many younger fans were decked out in “TOS” finery. Beyond that, there was a camaraderie in the building that belied the supposed “rivalry” among fans of the various shows,  a point made more than once by actors, authors, or historians during their panels.
Saturday was a very “Spock-centric” day, as we three hit two very emotional panels;. The first, titled “Growing Up Trek”, featured Julie & Adam Nimoy and Rod Roddenberry, describing how their lives were affected by the show, and in two very different ways. Rod wasn’t “into” Trek at all, and it wasn’t until his Dad’s passing and having watched his mother Majel navigate her way through the troubles of keeping her husband’s legacy alive that he began to understand. By contrast, the Nimoy children were surrounded by it, although Star Trek was a mixed blessing, as it certainly kept their father “away”, even when he was at home, as the part consumed him to a great degree. The second, “For the Love of Spock”, was even more heart-wrenching, centered on Adam Nimoy’s documentary of the same name (it premieres on-line September 9th), and we were all tearing up within the opening seconds of the trailer, and although the talk was fun, there was a tremendous depth that made you appreciate even more how special Leonard Nimoy was as a person. (Carolyn and I also attended a panel about the Seventies animated series, and I believe that she’ll have a essay about that up on Melissa’s site, and I’ll have two pieces as well, the first up today, and one on 12 September that’s quite personal.)
Back to the convention, having seen how densely populated “panel-ing” was at Star Trek: Mission New York , I knew that Sunday was going to be difficult to manage. First off, the schedule had many things that I was interested in slotted opposite each other, which took some of them off the board right away, but a bigger problem was crowd assembly and dispersal. 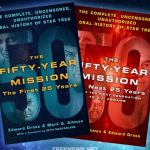 As the halls weren’t being emptied after the talks concluded, people were queuing up for panels that folks knew would be “The Big Ones” three panels ahead and staying in the auditoriums for hours! For example, I wanted desperately to see the cast of “Voyager” at 1 PM, but at show’s opening at 10 AM, people were rushing to that Main Stage already, and considering what followed there, some definitely remained through to the expo’s conclusion. Instead, I opted for a “Lost Years” panel conducted by Mark Altman which was based in part on the first volume of his oral history of Star Trek entitled “The Fifty-Year Mission”, a book that I can highly recommend! (Mr. Altman is also the producer/writer of “Free Enterprise”, and he signed my DVD as we bonded over LaserDiscs!)
Carolyn joined me for that one, with Melissa soon to follow (we saved her a seat, and–don’t tell anyone– she lied to the gate-keeper to get in!), as we knew that the ensuing panel, “The Women of Trek” was going to be a “hot ticket”. Featuring Marina Sirtis, Nana Visitor, and Terry Farrell, it was the highlight of the show. The ladies spoke openly about their lives and careers in-and-out of Star Trek. There were deeply personal stories, and lots of laughs, too,  but it was in those moments discussing the show and its impact that the deepest, most emotional moments occurred. At points, it felt as if everyone in the room was laughing or sobbing in unison, with each of the ladies bringing those feelings out in their colleagues as well.
Meeting up with some in-for-the-day dear friends, we took a tour of the building that included scoping out the line that was already forming for the 3 PM talk by Walter Koeing–which by de facto  was also the sort-of queue for the 4 PM William Shatner event, as everyone had gotten the lay-of-the-land by that point, and decided that “squatters’ rights” were as good as gold!
Obviously, as an original “Trekkie” I wanted to have a chance to see Mr. Shatner speak, but it seemed a dim hope as we approached the Main Stage just before Mr. Koenig’s talk began, as there were already more than a hundred people massed in what they were calling a “Shatner stand-by line”. As ReedPop and their security team weren’t clearing the halls, they didn’t feel that anyone would leave the room, so there seemed scant hope that we could get in, but we decided to wait the hour, just in case. As the time passed, there were many announcements that suggested that wait would be in vain, and as barely a soul left the auditorium, they seemed accurate; at this point, I would have been happy with catching a glimpse of Mr. Shatner walking into the room and would have called it a “win”.
The event was just about to begin when they opened the doors to let some straggling V.I.P.s into the room 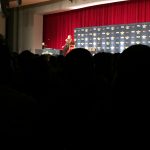 , and we could see “Captain Kirk” patrolling the stage, which was as close as I thought I would get until they began letting our crowd in, but only 20 at a time. As my count of the people who had left was only at two dozen, I didn’t think we would make the cut, but after some fits-and-starts (including one that left us five bodies from the door–shades of our friend Sarah and Sir Terry Pratchett!), we were actually and at long-last ushered into the room! He told amazing stories about his early career on Broadway, current projects that include a hard science documentary, and a interview with Steven Hawking where the professor asked Mr. Shatner about his favorite episodes! 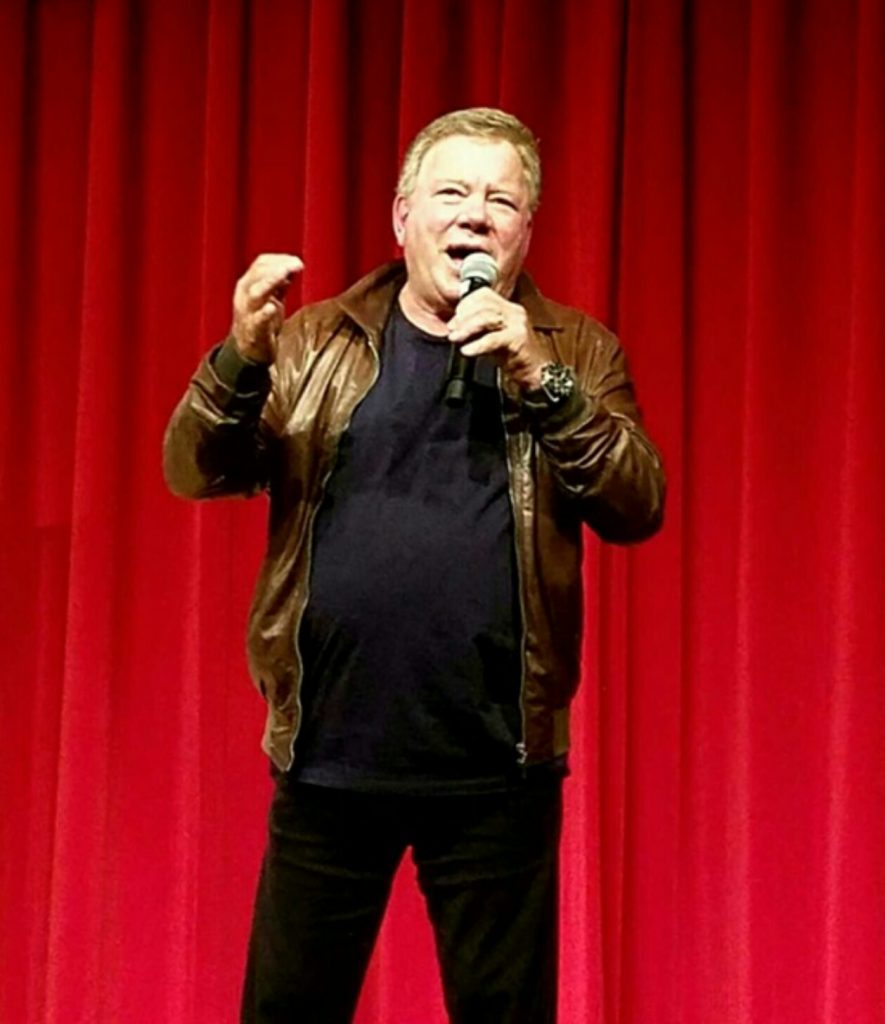 After recording our “Con Re-Cap”, Carolyn & I walked Melissa to the Port Authority Bus Terminal for her ride home, and then headed over to the legendary Algonquin Hotel, where we meet friends for cocktails and conversation, with hopes that ReedPop will have us all back next year, as that would be the 30th Anniversary of Star Trek: The Next Generation!