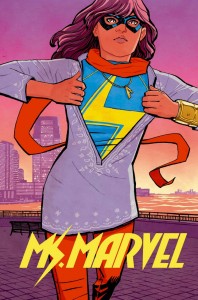 This past weekend, Long Beach Comic Expo gave out its second annual Dwayne McDuffie Award to Ms. Marvel, the Marvel Comics series starring teenage hero Kamala Khan, created by writer G. Willow Wilson and artist Adrian Alphona, and editors Sana Amanat and Stephen Wacker. As explained by award director Neo Edmund, “This award is a celebration of diversity in the medium of comic books. It is intended to raise awareness of the need to broaden the racial and gender representation of the characters we see on the pages of comic books, and to also broaden such representation of those who create this beloved form of visual storytelling.”

Kamala Khan is not the first character to be called Ms. Marvel. The name first belonged to Carol Danvers, who originally debuted in 1960s comic stories featuring the alien hero Mar-Vell AKA the first Captain Marvel of Marvel Comics (not to be confused with the kid who shouts “Shazam”). Carol started as a love interest before spinning off into her own series in 1977, now wielding powers and calling herself Ms. Marvel. Her series had a longer issue run than Mar-Vell before it was canceled. While she bounced around other parts of the Marvel Universe and used different aliases, another character named Sharon Ventura (love interest to the Thing of the Fantastic Four) adopted the name Ms. Marvel for a while, later calling herself She-Thing. The Ms. Marvel name was also briefly used by the super-villain Moonstone.

But some years back, Carol Danvers became the official Captain Marvel of Marvel Comics and the name “Ms. Marvel” was up for grabs. So in 2013, we met Kamala Khan, a New Jersey teenager who became the first Muslim hero to headline a Marvel Comics series. Kamala is a superhero fan who gains powers from the mutagenic Terrigen Mist and gets to work alongside the costumed champions she’s admired for years. Her star has consistently risen since her introduction and now she’s a member of the Avengers. As far as many fans and pros are concerned, the Dwayne McDuffie Award is a well-deserved honor.

I knew Dwayne McDuffie a little. We never hung out outside of conventions or press events, but when we ran into each other we always had a lovely talk. A brilliant man with a BA in English and a Master’s Degree in Physics, he was one of the founders of Milestone Comics, one of the creators of the hero Static, and one of the main writers on the animated Justice League Unlimited. Diversity was a great passion and concern for him, as were characters who symbolized morality rather than cynicism. The award event at Long Beach Comic Expo celebrated his life and legacy, as well as those comics which embrace diverse characters and viewpoints. We all benefit from the comics that are celebrated by the Dwayne McDuffie Award.