What better way to end a vacation in another country than go to a Con where I can feel out with other geeks? I can’t think of anything better! So I ended up going to London Super Comic-Con (LSCC)! I highly recommend that all of you end your vacations with an exciting experience like this. Let’s just say it’s an amazing high before the fall of reality. Also, I got to meet one of my fellow contributor Huw Parry and had so much fun chatting with him! 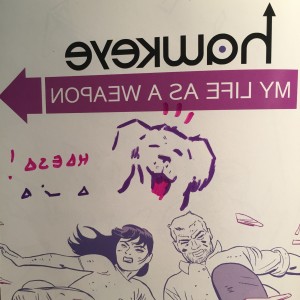 LSCC is not what people would call big. Though it does concentrate on comics, there are some fandom related things that can be found like Funko Pop, fanart, and a huge area dedicated to cosplay and props. What made this experience different is the sleuth of creators who were there! I got so many souvenirs and mostly comics (Surprise! Surprise!). There were so many self-publishers and they were amazing to talk to and all of the creators are super sweet and kind – or they found how red from embarrassment I became while talking to them. Also, since I love learning, what better way to learn more about the industry than listen to the greats talk about their experiences, hence, I attended loads of panels. All this in a day! Woah!

Let’s start at the beginning! LSCC My method of going to a Comic-Con this size to walk through it all. I want to recognize the landmarks and see all the things that make me squeal like a five year old at a candy shop before I take the next step. Then I start talking to people who peaked my interest. This is when I met the makers and self-publishers and got to know them or their creations better. So many tables have left an impression on me. Need a geeky dress that is still presentable, check out Super Betty. I am dying to get my hands on a dress. Want geeky art that is both tasteful and modernist like Maydak and Rokoro. The former is angular and striking. The latter is a 3D layered comic characters representing a story. If you need any child friendly stuff, Superherostatic is the choice! It is full of fun cute things. The people on those tables were kind and helpful, we geeked out on different things and had fun in general.

As my fascination lies with comics and there is an abundance of that in LSCC, a publisher like Myriad Editons produces many books and is true to the creators. This includes yank Born and UK based creator, Aneurin Wright, wrote a book about his daughter’s ability to help solve time-travelling authors in Sprout’s Bookclub. DieGo Publishing is self-publishing with diverse characters and compelling storylines. I personally recommend Desdemona since it is intense and a shout out to all of the insomniacs. Anna 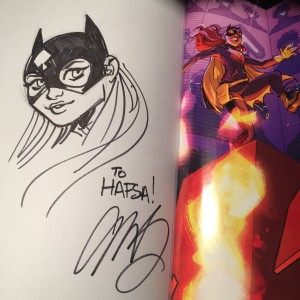 Savory and Verity Glass create art in the name of Anadapta Art. It is a compelling story in the form of a conversation between horrific imagery and sentiment in their comic Why Does My Love Scare You?. However, the most fascinating experience was talking to David Lloyd. We discussed my future in the industry but more importantly, we talked about his revolution. He said that “no revolution ever succeeded by hanging on to the past” eerily reminiscent of V for Vendetta. This was brought about by a conversation about his new endeavour called Aces Weekly . You can subscribe and get comic a week, strictly online and paperless with the proceedings going mostly if not completely to the creator.

What better way to learn more about creators than to hear them speak at panels? I attended a bunch of those! The funnest one was Sneaky Zebra & D.Piddy Presents Youtube and Cosplay panel is dynamic and funny stories. The panel showed what passion can develop into a fan base for a fan and that there is more to the fandom experience beyond shipping, fanfiction, and being a fanperson. My favourite panel is From Science Fiction to Superheroes with Howard Chaykin and Tom Palmer. It was interesting to see the different views they had to the experiences they shared. it was interesting to see how lonely the industry can be but still love the business for the art not the actual business. They also expressed that when you love stories like Star Wars, you are loving the brand not the talent. The example used was American Flagg!; it is a piece that influences artists but the general readership don’t know about it. Showing that the most people run after things that are known rather than look for pieces that may change their lives. This is not bad in any way but more of a comment on social behaviours.

This includes my behaviour. I admit that I do read things that are more brand-like than world changing stories. However, that does not mean there lacks an abundance of talent in either type of Graphic Novels. And talent was present in LSCC and they were all excited to meet their fans. Cameron Stewart took the time to discuss Comic Books as a literary modem with me and even encourage my pursuits. Lee Garbett drew an emoji version of Loki on the Little Book of Loki I got from him. We even managed to talk about the atmosphere of the story and how it veered away from the typical dark and angsty story of Loki: Agent of Asgard 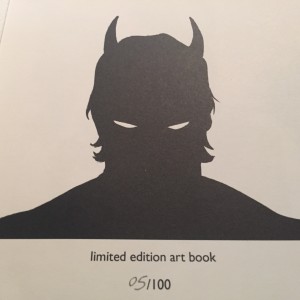 with humour and friendship. These are only examples and there is an abundance of creators whose fans do not engage with them. I know many people want to get the signature done so more fans can get a chance to meet them. I believe creators deserve more love and we fans need to give it out more!

Next time when you go to Comic-Con, learn lessons, experience something new, and give more love and time to everyone who you encounter because they are all geeks at heart too!

Also, for fans of the LSCC, there is a community group! Just follow the link here!!