Mali, formerly Maisie, is unemployed and directionless in Kansas City, trying desperately to get a fresh start on her life. However, she’s continually haunted by the past. During the day, she gets letters and emails from people who know her as Maisie, the step-daughter of the Omaha Ripper, a serial killer who is now dead. At night, she’s haunted by the nightmares of hundreds of past lives, where she’s fought hundreds of battles against one person, all ending in death. She soon realizes her nightmares are more real than she believed when her stepfather shows up in her apartment as a little girl and says that someone is hunting her. 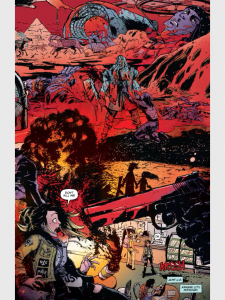 What we find out is that the world is filled with what the comic calls “sequels,” people who are reincarnated again and again. At some point in their lives, they are “woken up,” and they can access the memories and skills of their previous lives. These sequels fight in a war that has been going on for so long that no one seems to remember how it started or why they are fighting. The sequels who are soldiers are drawn to one other soldier as their target: their destiny is to fight them and then kill themselves to start the cycle all over. Some sequels have tried to cheat or escape the system, but it never works out well for them.

We learn about this world through Mali, who has stayed “asleep” for an unprecedented amount of time, and Tessa (her target/hunter), who woke up early and has spend most of her life trying to find Mali. Both have been hidden, and we start to realize that perhaps there’s something about these two that makes the powers that be want to keep them apart. They both yearn for a normal life outside of the war, but other sequels and their own compulsions prevent them from finding that peace. The comic keeps flashing back to their past lives, and giving an indication of the kind of relationship these characters have had through the centuries.

What really makes this book is the art by Sawyer and Roe and the colors by Zamudio and Tumburus. The art reminds me of Annie’s Wu’s sketchy pencils and heavy inks on Black Canary, and the harsh, vibrant colors add to the jarring, violent world. Some of my favorite panels are the ones where the sequels use their powers, as the art shows their former selves along the track of their movement. Much of the story is told through narration boxes: yellow for Mali and purple for Tessa. Around the third issue, the narration gets a little bit much, and I sort of wish the comic would let the art do more of the storytelling, but the narration boxes give the story an almost noir feel. The trade gives a complete story arc with a lot of suspense building to the end, but with the ending I’m definitely primed for the second volume.

Buy this trade. It takes a while to get used to the world, and the trade gives a lot of rules, but the characters are really compelling and the art is beautiful enough so that you don’t feel overwhelmed.