I don’t think I use the word ‘heartbreaking’ for Batman comics often. The events of the ‘Superheavy’ saga, one issue before the undoubtedly action-packed finale, has been crammed with incredible battles and great character beats. This issue, while not heavy on combat, gives up some of the best emotional moments in this arch by far.

Taking a break from the main Mr. Bloom conflict at first seems strange. Scott Snyder leads us into the issue with a glimpse into other worlds. The plot of this issue, as Bruce Wayne descends into a place he swore to never go back to, is intimate. Lending us some incredible imagery is Yanick Paquette, filling in for current artist Greg Capullo. Paquette sketches the deep shadows of the Batcave while showing us some alternate Batman designs, each more fascinating and varied than the last. It’s worth the pr 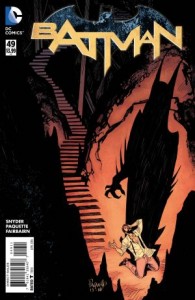 ice of admission just to get a glimpse at the well crafted creations on display.

In this issue, we get glimpse at different Gotham’s. Brightly lit Gotham’s. Tentacle filled Gotham’s. Different worlds, different paths. On one path, Bruce Wayne has a woman that he loves and a city that is dying. On the other, he has a descent into darkness that will return him to the man he was so happy to leave behind.

Heartbreaking. In Batman #49, we get a human drama that feels every bit as bombastic as any of this series’ best action scenes. The interactions between the determined Bruce and a grieving Alfred are some the best items on display here.

Buy it! Our current ‘Batman’ team isn’t just coasting to the big 50. Batman #49 feels epic, showing us small moments of triumph and suffering. There is a lot to love here. Snyder has promised that #50 will be one of the biggest issues yet. And I can’t wait. Take a gander.